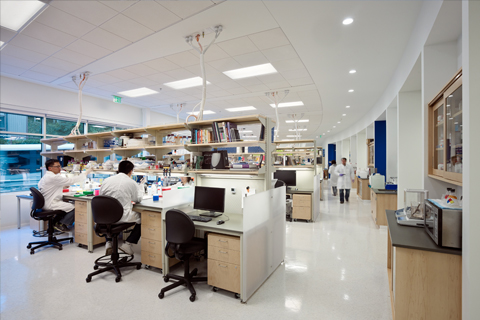 Consider the popular trend in designing open-space labs like those at UCSF's new stem cell research building, above.  These airy, sunlit spaces where researchers from different disciplines can interact with each other are representative of the new paradigm for open communication and sharing of specialized knowledge.  They're also, not coincidentally, more flexible.  By avoiding solid, permanent walls wired with electrical and piped for plumbing and ventilation, and instead running those services through floors and overhead space, labs can be reconfigured and repurposed much more easily and inexpensively in the course of their useful life.

If walls are needed to create contained research environments like clean rooms, modular walls or independent rooms can be added within the overall structure. Other flexible elements can include furniture and casements that are not only modular but highly mobile--because they are on wheels.  Note the file cabinets on casters that fit into cubbies within the lab peninsulas in the UCSF photo, as well as the overhead wiring.  All of these elements contribute to a less rigid laboratory plan, which translates into less money spent on expensive lab overhauls down the line and more money to be spent on research and ultramodern tools.

When building a lab from the ground up is cost-prohibitive or will require too much time, there's the option of having a modular lab installed wherever there is some unused space, in a matter of months, and with the option of moving it, integrating it into another space, or even returning it to the manufacturer (in the case of a lease) when the project is over.  Think this doesn't sound like the kind of thing in which a major research institution would be interested? They are, though not all of them want to admit that this sort of pragmatism makes sense for their research goals, even in this economy, as the following story illustrates.

A major modular lab company, Art's Scientific, just announced that they've won a $7M contract for a modular research complex with "one of the world's leading research and teaching institutions."  We asked them to name names, but apparently identifying their client is strictly prohibited in the terms of the contract.  Well, prejudices die hard, including, apparently, an association of pre-fab with cheap, temporary, and inferior.  Or so we presume by their reluctance to go public.  It's hard to imagine a research university not wanting to champion the building of new, highly-functional labs to support their research goals. (If we find out who they are, you'll be the first to know.)

Another modular lab complex in the news is in San Diego's hot biotech climate, and Janssen Research & Development LLC is not hiding their name or their pride in supporting startups by offering 30,000sf of leased, flexible, modular lab space in San Diego within their West Coast Research Center.  Janssen exec Diego Miralles, MD, explains the new Janssen Labs at San Diego project this way:

"This arrangement allows the [emerging] companies to focus on the development of the science instead of setting up and managing the labs," said Miralles.  "We believe this open innovation model will minimize cost and time and is an effective way for companies to develop and focus on research."

Since the announcement was made, Janssen has received over 100 applications by companies who would like to take them up on their offer, particularly since Janssen's open innovation business model means they do not own any stake in the emergent technology.  San Diego's mayor has commended the company for their contribution to building San Diego's life science industry.

When it comes to real estate, and especially laboratory space, startups cannot typically use very large spaces, and they can't afford them.  So a report like the one we highlighted recently by Jones Lang LaSalle on established and growing life science clusters, which was very concise, nonetheless ranked regions not only by the amount of available lab space (in sf), but on its size and flexibility.  For instance, it said of North Carolina's Raleigh-Durham market: 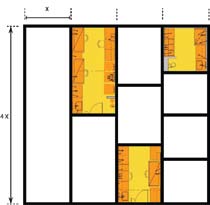 Very few lab spaces are available for lease, particularly in the range where most users fall, 5,000 to 15,000 sf. Conversely, several very large R&D facilities remain on the market, such as Wyeth’s 108,000-square-foot facility that was vacated in 2010. There is little demand for a contiguous space of that size.

Reasons to think modular, then, include: increased researcher contact, lower initial costs, greater flexibility, ability to lease, less chance of obsolescence, and the ability to get to the business of science research faster.

Note: In researching this article, we learned a lot about modular lab design from an article in Lab Manager Magazine that we'd like to credit.  [Image right is courtesy of that article as well.]

Biotechnology Calendar, Inc. is a biotech vendor services, marketing and events company with a reputation for professionalism earned from 19 years in a business we largely pioneered. We organize and promote premium life science trade shows, large and small, at top research university campuses nationwide. If you are a researcher or lab supplier interested in learning more about our 2012 schedule or attending one of our biotech events, we encourage you to explore our website and give us a call.