Oregon Health and Science University (OHSU) is about to host the 7th World Congress on the Developmental Origins of Health and Disease (DOHaD) in Portland from September 18-21, 2011. The study into the critical role of the first 1000 days of life (counted from conception) on lifelong health and susceptibility to disease is relatively new, and OHSU's Heart Research Center team is one of the largest and best-known DOHaD research groups in the world. At least 40 OHSU investigators, spanning 12 School of Medicine units and multiple centers/institutes within the university– along with about $14 million in grant awards since 2009 – are focused on aspects of this research into "the fetal origins of disease."

The DOHaD field of medical research is founded on what is known as "The Barker Hypothesis," which proposes that coronary heart disease, and the diseases related to it, have their origins in the body's responses to undernutrition during fetal life and infancy.  Dr. David Barker is an English physician and medical researcher who showed as early as 1989 that low birth weight was an indicator of susceptibility to heart disease later in life.  Since then, Dr. Barker has joined the research faculty at OHSU in the Heart Research Center and continued his work, which has burgeoned into a respected and provocative field with clear cross-over into the social sciences as well as other areas of health research.  New medical studies show that, in addition to affecting the heart's ability to ward off disease, early development and maternal nutrition can also be factors in developing: 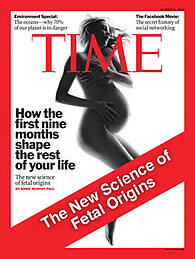 Dr. Barker is also well-known outside the medical community as a result of his popular book, Nutrition in the Womb (at right), and a Time magazine cover in September 2010 (at left) that put DOHaD as a medical discipline into the national spotlight.

Connect with researchers at OHSU at our 9th Annual Portland BioResearch Product Faire™ Event is coming up on October 11, 2011, on the OHSU campus.

This Science Market Update blog series is brought to you by Biotechnology Calendar Inc., an 18-year veteran in the marketing and tradeshow industry for the life sciences. With events held across the country at major research university campuses, Biotechnology Calendar, Inc. brings together researchers and laboratory equipment suppliers in a productive, professional environment where they can share knowledge and information about the technologies that allow scientists to advance their work. Visit our website for information about upcoming life science vendor shows in your area.