In 2008 the 360,000 square-foot Perelman Center for Advanced Medicine Building opened adjacent to the Hospital to provide outpatient care.  In 2009, the 75,000-square-foot Roberts Proton Therapy Center opened in the same building (mostly the basement).  A tower addition to the Perelman Building now contains the $370M Translational Research Center, the first Penn project to integrate hands-on research labs with patient-care facilities, bridging the gap between basic science and clinical care. 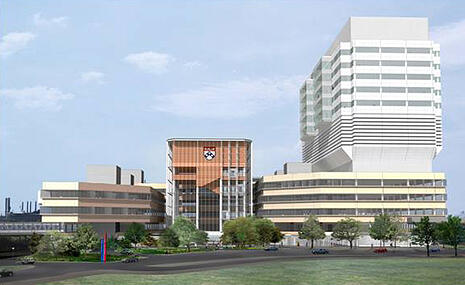 (Photo courtesy of the University of Pennsylvania)

The Clinical and Translational Research Center (CTRC) is a branch of the Institute for Translational Medicine and Therapeutics at Penn Med.  The CTRC was formed with an NIH Clinical and Translational Science Award, and an additional $13M stimulus/ARRA grant allowed for additional lab space in the new facility.  The Center houses both traditional departments like Cell and Developmental Biology and Pharmacology, as well as disease-related institutes studying specific areas such as diabetes and heart disease.

The term translational science generally refers to the translation of pure science into therapies for use in human beings (such as new drugs).  In the current economic downturn, commercial drug companies have scaled back on the costly projects that are required to bring new therapies to market, and President Obama has made it part of the NIH's mission to take up some of the slack.

In a Jan. 22 article in the New York Times, NIH Director Dr. Francis Collins announced the creation of a National Center for Advancing Translational Sciences that will take on some of the responsibility and cost of testing new drug therapies. Penn Med Director of ITMAT, Garret FitzGerald, supports the new NIH plan.  He sees it as an opportunity to help institutions like his own recruit and train a generation of researchers who perceive less of a gulf between industry and academia.

Offices on the 10th Floor of the new building are already occupied by ITMAT staff, and FitzGerald's lab will be moving to the tower next month.

If you are a bioscience supply vendor and would like to meet researchers and purchasers at the University of Pennsylvania, plan to exhibit at the Philadelphia BioResearch Faire ™ Event at U Penn on May 19, 2011.  Also in Philadelphia, later the same week, is the BioResearch Front Line ™ Event at Thomas Jefferson University on May 18, 2011. These events are brought to you by Biotechnology Calendar, Inc., providing professional research science events to the scientific research community for over 20 years.