Radical building for a radical science.

If stem cell science intends to revolutionize medical research, it's hard to envision a better or more apt place to do it than the new Ray and Dagmar Dolby Regeneration Medicine Building.  Opened last month at the Parnassus Campus of UCSF, the low-slung building hugs the steep hillside like a series of linked terraces, each topped with a green/living roof and seating area.

One strong motivator of the building's design (other than topography) was the desire to create interactive spaces and facilitate access by researchers to colleagues working on related projects in other disciplines.  Labs are open to each other and natural light, embodying the contemporary paradigm of transparency and the free flow of information.

The Dolby Building's $123 million cost has been borne by private and state donors exclusively, allowing researchers to work without the limitations imposed on stem cell research by the federal government.  The largest private funders are the Dolbys, at $36 million, and the Eli and Edythe Broad Foundation, at $25 million.  The California Institute for Regenerative Medicine (CIRM), funded through Prop 71, contributed $34.9 million to the project.  UCSF still has $12 million to raise.

Research at the Broad Center is organized into 7 areas, or pipelines, and carried out in over 125 labs:

Other research centers that have either been established by or benefited from the Broad Foundation's dedicated support of stem cell research are USC (Keck School of Medicine), UCLA, MIT, Harvard, and the Whitehead Institute.  The USC and UCLA stem cell research programs are also named after Eli and Edythe Broad.

It was at UCSF in 1981 that scientist Gail Martin co-discovered embryonic stem cells in mice and coined the term "stem cell".  It's fitting that the university hailed as the flagship for this historically controversial research field has built a research facility that looks very much like a ship facing the ocean in dry dock. 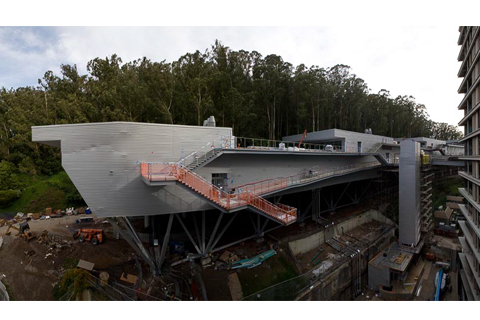 Watch the video below for more visuals and opening ceremony comments (courtesy of UCSF):

Opportunities for suppliers to the life sciences continue to grow as facilities such as the Broad Center attract the very best researchers from around the globe.  To meet these researchers, plan to be at the San Francisco Biotechnology Vendor Showcase™ at the UCSF/Parnassus Campus this summer on June 16th, 2011.