This gift will create a mentorship fund honoring Mr. Tim Boyle’s Aunt Hildegard Lamfrom, who was a leading molecular biologist before she died of cancer in 1984 at age 62.

Hildegard Lamfrom was an outstanding cancer researcher and a trusted advisor who mentored many renowned scientists. One of the beneficiaries of her encouragement was a young undergraduate chemist, Brian Druker, who is now one of leading researchers at the Oregon Health and Science University Knight Cancer Institute. With Lamfrom’s early mentorship and encouragement, Druker, M.D. gained admission to medical school and set up his career goal in pursuing a cure for cancer. He and his research team at OHSU made headlines when they created the first targeted treatment that kills cancer cells while leaving healthy cells unharmed. His novel research turned a previously lethal cancer, Chronic Myeloid Leukemia, into a manageable disease and paved the way for development of targeted treatments for other types of cancer.

The mentorship program is an excellent tribute to Hildegard Lamfrom, which will help cultivate a new generation of scientific minds who devote to basic science and push its capacity to solve the most complex problems in human health.

This $10 million gift is the largest private donation in support of a $1 billion OHSU fundraising campaign to revolutionize early detection and treatment of cancer. More than $310 million has been raised to date.

A significant number of research funds upcoming at OHSU will ensure the best and the brightest scientists and research hands continue to join OHSU to develop new treatments and cures for cancer. OHSU is a nationally prominent research university and Oregon’s only public health center. OHSU operates dental, medical, nursing and pharmacy schools that rank high both in meeting the university’s social mission and in research funding.

Some details about research funds distribution by departments are as follows:

OHSU is an attractive marketplace and home to a significant number of research programs, which are stimulating the next wave of innovative thinking and research that will create the scientific breakthroughs needed to save millions of other lives.

If you are a laboratory supply company interested in demonstration of your products and services to those novel laboratories at OHSU, Biotechnology Calendar, Inc. invites you to the 12th Annual BioResearch Product Faire™ Event on September 11th 2014 to face-to-face access your target laboratory research audience. 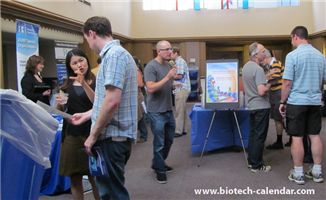 Last year, the BioResearch Product Faire™ event at the Oregon Health and Science University attracted 138 attendees. Of these attendees:

If you are interested in exhibition at the BioResearch Product Faire™ Event on September 11th 2014, please click the button below for more information.

Biotechnology Calendar, Inc. is producing more than 60 events at different institutions across the nation each year. Please read: National Show Schedule for 2014.