Columbia University’s medical school is undergoing a groundbreaking transformation in the most literal sense of the word: Construction crews have broken ground on one of two new medical buildings in the works at the powerhouse university’s campus. The new buildings will include teaching space as well as state-of-the-art science research labs.

“There is no building like it anywhere,” said Lee Goldman, dean of faculties of health sciences and medicine at Columbia University. “Our top priority was to create the best possible educational building for the best medical students in the country. This building symbolizes why most medical and graduate students come to Columbia.” 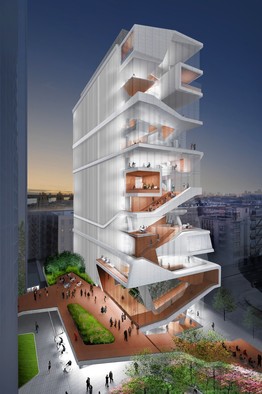 Columbia University is also building a new nursing school. This new medical building will be a seven-story, 70,000-square-foot, $40 million structure once completed. Located on the west side of Audubon Avenue, between West 167th and 168th streets, the nursing school was originally planned to be a three-story building running the entire length of the faculty parking lot. Architects later decided upon a taller building taking up less city block space on the northwest corner of the block.

"We decided to break the rules of the competition, and create a stand-alone building," said Guy Geier, the managing partner at the joint-venture of two architecture firms in charge of designing the new medical building.

Renovations to more than 500,000 square feet of science research labs throughout the campus have already gone through to completion since Dean Goldman came to Columbia University. "The goal is to make it as state of the art as it was in the 1920s, when the campus was created as a model for medical education," Dean Goldman said.

If you are a lab supplier interested in marketing your life science solutions at the well-funded Columbia University, Biotechnology Calendar, Inc. invites you to attend our Columbia University life science vendor show. Our BioResearch Product Faire™ Event at the Armory Track & Field Center on September 30th, 2014. Last year, this life science vendor show attracted 436 attendees. Of these attendees, 127 were purchasing agents, professors and post docs, and 63 were lab managers.