Oil spills are unfortunately becoming an increasing reality in our world. Since the infamous Gulf of Mexico oil spill, which has yet to be fully cleaned up, the world has seen 65 more spills, 8 of which occurred in 2013 alone. As supported by the fact that the BP spill cleanup is now in its 10th year, there is a lack of inexpensive yet effective ways to handle such ecological disasters. From the labs of the University of Wisconsin, Madison comes a biotechnologically sound solution that also manages to be environmentally friendly: a “greener” aerogel.

Aerogels are like sponges in gel form – they are extremely porous and are the lightest solids in existence. They are used in insulation and spaceships because of their low thermal and electric conductivity. They are also very good at soaking up liquids, but the trick is developing the right kind of aerogel for the job. For instance, if you wanted to clean up an oil spill but your aerogel soaked up water as well as oil, then it wouldn’t be very effective at cleaning the water. In addition, most aerogels are made from plastics like silicon, making them very difficult to dispose of properly. (See our recent UIUC blog for more info on the environmental problems plastics pose.)

By contrast, Madison bioresearcher Shaoqin “Sarah” Gong (pictured above left, courtesy UW-Madison), associate professor of biomedical engineering, has developed a revolutionary aerogel made from cellulose nanofibrils, which are completely biodegradable. This gel actually repels water but is extremely absorbent when it comes to petroleum and other hazardous chemicals. An excited Gong adds that “one unique property is that it has superior absorbing ability for organic solvents — up to nearly 100 times its own weight,” as she puts it in a UW Madison article. 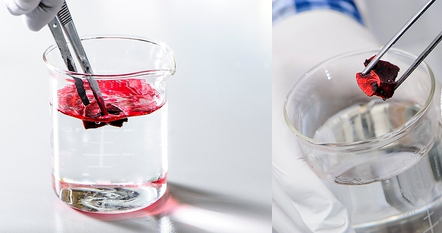 As shown in the picture above (courtesy UW-Madison), the aerogel can be placed in water and absorb the oil therein (shown in red) completely. The “greenest” part of the aerogel is that it’s recyclable even before its disposal. In Gong’s words, “Once it’s fully saturated, you can take it out and squeeze out all the oil. Although its absorbing capacity reduces after each use, it can be reused for a couple of cycles.”

This groundbreaking development is still in the testing stages, Gong and her team are very excited for its mass production and look forward to the effects it can have on the oceans of the world.

Funding for this study came from the US Department of Agriculture and the Endowment for Forestry and Communities. For further reading regarding funding for the University of Wisconsin, Madison and its studies, click on the link below: