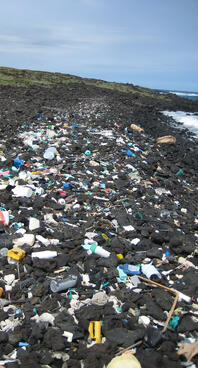 Plastic bags are one of the most difficult household items to properly dispose of. Throwing them away is ultimately ineffective: they can blow away from landfills and very often make their way into waterways. There they wreak havoc on the wildlife of all sizes. Plastic doesn’t biodegrade, which means that even if it’s broken down, there are building blocks of plastic called nurdles that cannot be broken down further. They’re too small to be of concern to most animals, but they still affect organisms on a molecular level. We saw in a BCI article last year how large collections of plastic like the North Pacific Subtropical Gyre can change the behavior of the surrounding bacteria (in that case, by increasing their outputs of toxic mercury, which gets in the fish we eat).

(Plastic from the ocean washes up on the shores of Hawaii. Image courtesy Wikimedia Commons and NOAA)

Unfortunately, there are few good methods of recycling plastic bags. The EPA reports that only about 13 percent of the 100 billion shopping bags discarded by Americans each year are actually recycled. That’s because most methods today take a lot of energy for their output. Senior researcher Brajendra Kumar Sharma and his team have developed a quite intuitive recycling method: focus on turning the bags into fuel. “[S]ince this plastic is made from petroleum in the first place, we can recover almost 80 percent fuel from it through distillation,” he explains in a UIUC article. 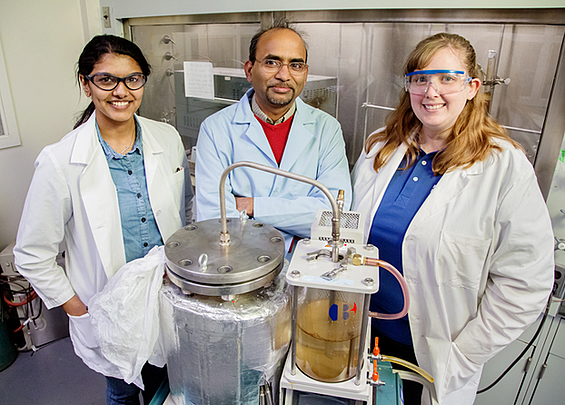 (Sharma and his team, courtesy UIUC)

The team’s approach was to convert the plastic bags back into oil and see how the result met with national standards for biodiesel fuels. They found that with just the addition of the right antioxidant, their fuel complied perfectly with biodiesel standards. What’s more, “This diesel mixture had an equivalent energy content, a higher cetane number (a measure of the combustion quality of diesel requiring compression ignition) and better lubricity than ultra-low-sulfur diesel,” says Sharma.

Sharma and his team are excited to begin making use of the massive amount of plastic bags wasted each year. Their work is supported by grants from the Illinois Hazardous Waste Research Fund and the Environmental Research and Education Foundation. More funding information related to the University of Illinois, Urbana-Champaign and the research it conducts can be found using the link below:

If you are a UIUC researcher or laboratory supplier, and would like to boost awareness of your products and increase scientific sales, plan to attend Biotechnology Calendar, Inc.'s annual Urbana-Champaign BioResearch Product Faire™, held next on Wednesday, April 30, 2014 on the University of Illinois campus. While you’re in the area, consider attending BCI’s Chicago BioResearch Product Faire™ the next day, Thursday, May 1, 2014. Biotechnology Calendar, Inc. has been bringing life science research trade shows to top research campuses for 20 years now. If you’d like to attend a show closer to home, please see our 2014 schedule of events.