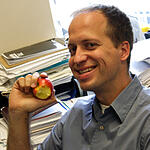 It is well known that HIV hijacks the immune system by attacking cells known as T lymphocytes. In a nutshell, HIV forces their T lymphocyte hosts to create more HIV cells and then kills them to reduce the overall potency of the immune system. T lymphocytes do fight back with a protein known as APOBEC3, but HIV produces a “counter-protein” called Vif that tricks the lymphocytes into destroying their APOBE3.  The prevailing belief is that Vif renders the T lymphocytes helpless against HIV, but University of Minnesota professor Reuben Harris (left) hypothesized that there was more to the story.

Harris and his doctoral student Eric Refsland (right) developed this hypothesis because, as stated above, some people can entirely resist infection from HIV. They studied the proteins APOBEC3 and Vif in more detail and found that T lymphocytes produce much more APOBEC3 when under attack from HIV, suggesting the protein is one of the key defense mechanisms against the virus. Also, they found that each person has their own variety of APOBEC3 with varying potency. The strongest strains of APOBEC3 are actually able to fight off HIV, and strains with average strength are locked in battle with HIV in a somewhat evenly matched contest.

“This work shows that the competition between the virus and the host is still ongoing,” says Refsland in a recent UMN press release. “The virus hasn’t completely perfected its ability to replicate in humans.” Contrary to popular belief, the battle is not often one-sided.  The next step is using these findings to make APOBEC3 stronger so that it can do its job. As Harris puts it, “This is a bona fide HIV killing pathway, and we just have to devise clever ways to activate it in infected persons. Such an approach could indefinitely suppress virus replication, and even result in curing it.”

Minnesota is the place to be this May, since Biotechnology Calendar, Inc.  is hosting two of its BioResearch Product Faire™ events there. First, we have the BioResearch Product Faire™ Event in Rochester, Minnesota on May 20th, 2015, followed by the BioResearch Product Faire™ Event at The University of Minnesota, Twin Cities on May 22nd, 2015. The latter event will be held directly on the thriving University of Minnesota, Twin Cities Campus. Biotechnology Calendar is a full service event marketing and planning company producing on-campus, life science research trade shows nationwide for the past 20 years. We plan and promote each event to bring the best products and services to the finest research campuses across the country. To attend one of these shows, please click the buttons below. Otherwise, feel free to peruse our 2015 show schedule.