In January 2013, we were blown away by a completely biological robot created at the University of Illinois, Urbana-Champaign. Two years later, the team is making exciting new steps in this unique and next-generation endeavor.

For those of you who might need a refresher, the last bio-bot was an extraordinary contraption created from rat cardiac cells and hydrogel. It was created by professor of bioengineering Rashid Bashir and could walk on its own. Most impressively, it needed no external power source and was comprised of only biological materials. An image is shown below (courtesy UIUC) for reference. 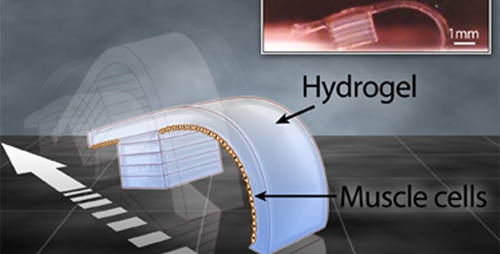 Walking forward was quite the accomplishment, but Bashir wanted to steer his bio-bot. So he experimented with different methods, including electrical stimulation, and decided on implementing optogenetics. Basically, the muscle cells contract in response to a particular wavelength of light, which means they will walk toward such a light source.

“The bottom line of what we are trying to accomplish is the forward design of biological systems, and we think the light control is an important step toward that,” says Bashir in the University of Illinois update.

In addition, the design of the bio-bot has undergone an overhaul. Instead of a strip of hydrogel, the backbone is a 3D printed skeleton, with rings of muscle cells placed around the skeleton to grant it motion. An updated image is included below: 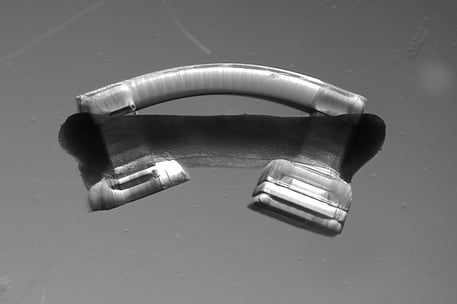 “With the rings, we can connect any two joints or hinges on the 3-D-printed skeleton," says Bashir.  "We can have multiple legs and multiple rings. With the light, we can control which direction things move. People can now use this to build higher-order systems.”

This work was part of the Emergent Behaviors of Integrated Cellular Systems project, funded by the National Science Foundation. Bashir and his colleagues received a five-year, $25 million renewal in fall 2015. More funding information related to the University of Illinois, Urbana-Champaign and the research it conducts can be found using the link below:

If you are a UIUC researcher or laboratory supplier, and would like to boost awareness of your products and increase scientific sales, plan to attend Biotechnology Calendar, Inc.'s annual Urbana-Champaign BioResearch Product Faire™, currently scheduled for April 12, 2016 on the University of Illinois campus. Later on, at the end of the summer, we'll have our Chicago BioResearch Product Faire™ on September 22, 2016. Biotechnology Calendar, Inc. has been bringing life science research trade shows to top research campuses for 20 years now. If you’d like to attend a show closer to home, please see our 2016 schedule of events.