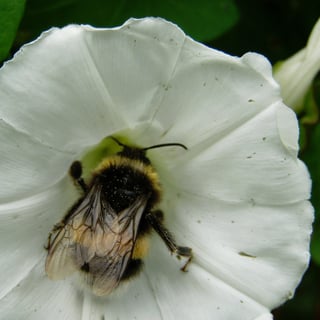 Pyrethroids are a special chemical class of active ingredients found in many insecticides. They target the voltage-gated sodium channel, a protein found in nerve and muscle cells used for rapid electrical signaling. Pyrethroids bind to these voltage gates and prevent them from closing. The nervous system becomes over-stimulated and the insect is killed. These insecticides do not have the same effect on humans, or other mammals.

Ke Dong, Michigan State University (MSU) insect toxicologist and neurobiologist, honed in on a single protein that could afford bumble bees the same resistance as humans – tau-fluvalinate, a pyrethroid insecticide.

Scientists initially began with the sodium channels from other bugs, such as mosquitoes, fruit flies, cockroaches, mites and ticks, to find where pyrethroids bind on insect sodium channels to effectively kill them. “By examining wild mosquitoes that have become resistant to pyrethroids, we were able to help narrow down the potential sites on which to focus,” Dong said.

In a previous study, Dong and the team identified mutations that made the channels more resistant to pyrethroids. They also identified two distinct pyrethroid binding sites on insect sodium channels and uncovered the molecular differences between mammals’ and insects’ reactions to pyrethroids.

For the current study, the team focused on why bumble bees and honey bees are resistant to tau-fluvalinate, yet highly sensitive to most other pyrethroids. The team discovered that their sodium channels are resistant to tau-fluvalinate, but they are sensitive to other pyrethroids. Further mutational analysis revealed that specific amino acid residues in the sodium channels of bumble bees are responsible for the selective toxicity.

Future research will examine sodium channels of various pest and beneficial insects to explore the features of pyrethroid binding sites. This could lay the groundwork for designing new and selective pesticides. It also will shed light on how pests develop resistance to insecticides over time and how beneficial insects respond to them in the field.

This research is supported in part by $300,000 grant from the NIH’s National Institute of General Medical Sciences. Over the last three years the NIGMS has awarded, Professor Dong, Ph.D. nearly a million dollars in research funding to find a way to protect bee and other beneficial insects from pesticides. In 2017 Michigan State received 22 grants from the NIGMS, totaling nearly $6 million.

This is an excellent opportunity for lab suppliers to meet face to face with life science researchers and educate them about current lab or chemical supply products. Call us at 530-272-6675 or click on the link below to learn how to increase your scientific sales in 2018.

Life science professionals are invited to attend the annual on campus biotechnology trade show for free. Click the button below for additional information or to pre-register. 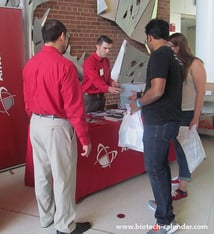 While in the area, lab suppliers may also want to consider exhibiting the following day at the annual BioResearch Product Faire™  Event at the University of Michigan, Ann Arbor on Thursday, August 9th, 2018.