The global bee population is in trouble, but perhaps biotechnology holds the key to its rescue. We saw last year how a Michigan State University team improved the pollination capacity of bees. Now that very same team is working on a way to defend bees from a parasite they believe may be responsible for the population decline.

Last year, MSU entomologist Zachary Huang worked on helping bees pollinate more. But then he considered the possibility of an external factor causing the bees to die out. Huang found that the Varroa mite (left, courtesy Wikimedia Commons and the Agricultural Research Service) is certainly such a factor.

The mites have been a notorious problem in Asian bee colonies for some time. They emit a scent almost identical to that of the bees so that the bees don’t realize their presence, and then they slowly consume the bees in their parasitic way. This might sound like a simple accomplishment, but the fact that bees rely extremely heavily on their sense of smell to function socially means that the mites need to produce perfect scents in order to pass undetected.

What’s more, the mites fool entire colonies by realizing and emitting the scent of the individual colony.

“They are essentially getting through the door and reaching the inner sanctum by using bees’ own complex communication codes against them,” explained Huang in a MSU press release. 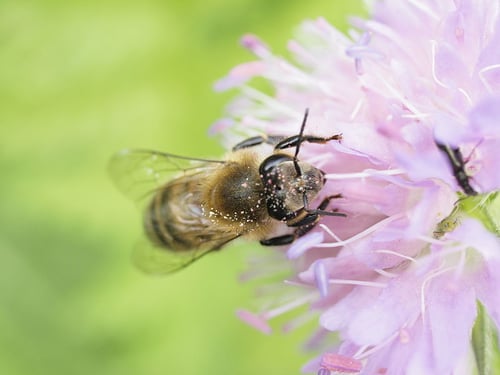 Huang discovered that in order to defensively adapt to these invaders, bees have been evolving better smell sensors to sniff out the mites. But in response, the mites evolve better and better mechanisms to copy the bees’ scent. As Huang puts it:

“Our results give a clear illustration of an arms race between the parasites and the host bees based on chemical mimicry and its detection.”

The Varroa mites proved to be even more adept at adapting when they migrated to Europe. They have since been terrorizing European bees despite their vastly different scents and scent sensors.

Ever the entomological protagonist, Huang will next work toward rendering the mites’ copying ability useless. Perhaps he’ll find a way to dramatically increase bee perception or prevent the mites from producing the necessary compounds to emit the scents.

Huang’s research is supported in part by MSU AgBioResearch. For more information on the grants MSU earns with its outstanding research, peruse our free Funding Statistics report, below:

Biotechnology Calendar, Inc. pays a visit to Michigan State University each year for the East Lansing BioResearch Product Faire™, a life science event held right on the university campus. Make sure to mark your calendar for July 22nd, 2015 when we next return to MSU.

Biotechnology Calendar is a full service event company that has produced on-campus, life science research trade shows nationwide for the past 20 years. We plan and promote each event to bring the best products and services to the finest research campuses across the country. If you are a university researcher or a laboratory product vendor, consider attending one of our on-campus trade shows: here is our 2015 schedule.