Biochemists at the University of California, Los Angeles recently developed the largest molecular "cage" ever created. This "cage", a cube-like structure, was constructed from 24 copies of a single protein that has the ability to self-assemble into a cage. This newly created cage could potentially lead to new ways of delivering vaccines to infected cells. 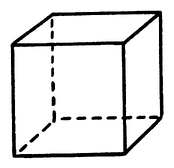 This protein cage is much smaller than any cell in the human body, and the thought is that these molecular cages can be used to carry vaccines into cells to protect against diseases like the flu, HIV and cancer. The way the proteins link together in the cube-like structure of the cage leave many openings that can allow different molecules to enter and exit the structure, which means that vaccines carried by the cage could easily be released into cells to fight bacteria and diseases in the cells. (Image on left courtesy of Wikimedia Commons).

Currently, the openings in the created cage make it unable to carry medicine into cells since there is no way to control when the medicine would leave the cage. Todd Yeates, Ph.D., a professor in the UCLA departments of chemistry and biochemistry explained that "the design principles for making a cage that is more closed would be the same.” He also explained that there are ways to make the cage unstable when it enters the cells so that the content - vaccines or toxins - could be released once inside the cells.

Todd Yeates, Ph.D. has spent many years studying proteins that have the ability to self-assemble, and in 2012 he created what was at the time the largest-ever molecular cage assembled from 12 proteins. The newest cage recently created doubled the size of the previous cage, and now that the UCLA team is able to create a 24 piece protein cage, the next step is to create a cage composed of 60 proteins.

Although there are new challenges that arise with the creation of each larger cage, bigger cages could, in theory, carry more useful vaccines and other supplies into the cells, being more beneficial than smaller cages that have the ability to hold less.

The UCLA team created cages made of the same protein that bond together in a cube formation. The illustration above shows molecules of succinic acid bonding together, as an example of same-molecule bonding. (Image courtesy of Wikimedia Commons)

The University of California, Los Angeles is a billion dollar research marketplace that has more than 290 medical research centers. In the 2014 fiscal year, UCLA researchers and departments received nearly $361 million in funding from the NIH. The research departments that received the largest amounts of this funding were:

*Data above collected from the NIH RePorter.

With so much funding, life science researchers and departments at UCLA are able to purchase new lab products to grow their research labs. Biotechnology Calendar, Inc. hosts a semiannual Biotechnology Vendor Showcase™ Event at UCLA twice a year that gives hundreds of researchers the chance to meet face-to-face with lab supply companies to find the best new products and technologies that will help further their research.

In 2015, the 35th and 36th semiannual events at UCLA will be held on April 2 and October 22, respectively. To learn more about participating in either of these events, visit the link below.

While in the Southern California area, consider participating in the two other events happening in the same week as UCLA:

To continue to read articles about research, discoveries, and funding in the science market around the country, subscribe to the Science Market Update blog on the upper right corner of this page.