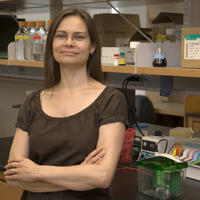 Joanne Turner is an associate professor of microbial infection and immunity at OSU. She compares the lungs of old mice to young mice to determine what “old age” in the lungs translates to biologically. In her most recent study, she studied the ability of the mice to fight off tuberculosis bacteria in the lungs. As expected, the old mice had a more difficult time fending off the infection, but Turner noticed something strange: the immune system of the old mice was spending all of its energy fighting inflammation in the lungs, which was giving TB the chance to prosper.

Curious as to what this meant for humans, Turner and her team researched the similarities between mouse and human lungs. They found that as both mammals age, they develop pro-inflammatory proteins that inhibit the immune system. Currently, the team is working on a more specialized way to reduce this inflammation; until then, Turner doesn’t recommend that elderly people simply take more ibuprofen. “You can actually reduce your inflammation as you age by being lean, eating well and exercising. And we know that in the elderly, people who are fitter live longer.”