Researchers at the University of Colorado, Boulder have recently discovered information about stem cell division that may change the way we approach regenerative medicine and cancer research. These findings were published as the cover story in Science for its February 5th issue.

It is common knowledge now that cancer is caused by erratic and unwarranted cell division. One of the key focuses for cancer researchers is thus stem cells, which are unique in their ability to divide unlimited times and replenish commonly damaged cells, like skin cells. Skin stem cells are particularly interesting due to their high turnover rate: some estimates have all skin cells in a human adult being replaced as often as every 30 days. 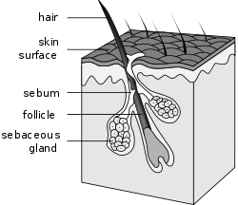 With such a high demand for new skin cells so frequently, the Yi lab at the University of Colorado, Boulder wanted to investigate skin stem cell regulation: how these cells know when, and when not, to divide. What Dr. Rui Li, Associate Professor of Molecular, Cellular, and Developmental Biology and Principal Investigator, and his team discovered by studying genetically engineered mice is a transcription factor which when expressed, inhibited cell division in hair follicle stem cells.

Transcription factors are proteins which regulate when genes are turned "on" or "off", essentially when they are expressed in a cell. The transcription factor of interest to these Colorado researchers, Foxc1, was found to regulate over a hundred different genes and when present, turned on genes that inhibited cell division and turned off genes that were necessary for cells to divide. This two-way strategy ensures effective control over cell division and keeps the monthly division schedule in check.

One of the most curious discoveries Dr. Yi's team found while studying the Foxc1 factor is that it is only present in cells that have divided at least once. There is no evidence to suggest this factor exists inactivated in undivided stem cells, and it remains unclear how Foxc1 manages to appear in only previously divided cells. Another mystery surrounding Foxc1 is how its target genes mechanistically prevent cell division. This last question remains a focal point for Dr. Yi's research team, as the answer to this could reveal the key to treating cancers like basal cell carcinoma and squamous cell carcinoma, which commonly develop from hair follicle stem cells.

The University of Colorado, Boulder is currently receiving nearly $40 million in active life science NIH funding to support research projects. This funding is being used throughout a variety of departments to fund many different projects including:

Biotechnology Calendar, Inc. produces life science tradeshows at more than 60 institutions around the U.S, and will be making an appearance at the University of Colorado, Boulder and the University of Colorado, Anschutz Medical Campus in July, 2016. These BioResearch Product Faire™ events give lab suppliers the chance to meet face-to-face with active and interested researchers directly on campus. Lab suppliers will be able to demonstrate their products to decision makers on campus, making valuable connections.

The 18th Annual BioResearch Product Faire™ Event at the University of Colorado, Boulder will be held on July 20, 2016.

That same week, on July 22, 2016, the 7th Annual BioResearch Product Faire™ Event at the University of Colorado Anschutz Medical Campus will be held just 30 miles away in Aurora.