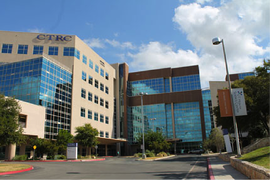 Breast cancer research recently got a nudge in the right direction with a little help from a pair of product development grants, totaling nearly $4 million.  For the past seven years, scientists at the University of Texas Health Science Center at San Antonio have been searching for a way to “switch on” natural processes that are crucial to fighting breast cancer, and their efforts are starting to pay off.

Both of the two programs chosen to receive this funding are dealing with research that could drastically change the landscape of breast cancer treatment.

Rong Li, Ph.D., professor of molecular medicine is heading up research that will capitalize on the ability of an existing drug for hot flashes to reduce tumor growth.

Ratna Vadlamudi, Ph.D., professor of obstetrics and gynecology, is leading a team of researchers to develop a new drug that may be able to prevent the development of drug resistance in breast cancers.

Li and his team at the Cancer Therapy and Research Center (CTRC) are developing a process to activate a crucial protein that could inhibit the growth of tumors in “triple-negative breast cancer,” a particularly aggressive form of the disease that lacks targeted treatment options. Using a drug in development by pharmaceutical company Ausio, the team hopes to harness the power of the drug to suppress tumors due to its ability to activate Estrogen-beta proteins described as being “anti-tumor”.

Dr. Vadlamudi’s research involves the development of a small-molecule drug called ECBI (ESR1 coregulator binding inhibitor), which can potentially prevent the development of drug resistance in breast cancer patients. Breast cancer tumors grow in response to an abundance of the hormone estrogen, so a common treatment option involves the use of estrogen blocking drugs. However, many patients can develop a resistance to these drugs and their tumors will continue to mutate and grow.

The grants, each totaling $2 million, were given to researchers at the University of Texas Health Science Center at San Antonio by The Cancer Prevention and Research Institute of Texas (CPRIT), and will be enough to continue funding research for the next three years. The pair of grants will support Health Science Center researchers' work in two cancer-related programs, and are part of more than $65 million in new CPRIT funding awarded in November. Since it was founded in 2009, CPRIT has awarded more than $1 billion in grants supporting cancer-related research and prevention efforts. “The funding will help us develop these first-in-class cancer therapy drugs that address the critical need of targeting therapy resistance and metastasis of breast cancer,” Dr. Vadlamudi said in a press release.

Laboratory vendors and industry professional interested in gaining access to one of the largest market areas in bioresearch should plan on attending one of three upcoming events in the Texas area in January 2015. Below you will find statistics and upcoming events at some of the Southwest’s most influential and well-funded research facilities:

BioResearch Product Faire™ Event at The University of Texas, Austin

o   Research at The University of Texas, Austin takes place at more than 150 research units.

o   Last year, the BioResearch Product Faire™ event at the University of Texas, Austin attracted 196 attendees, of which 39 were professors, post docs and purchasing agents.

o   Last year, the BioResearch Product Faire™ Event at Texas A&M University attracted 150 attendees. Of these, 24 were professors and post docs, and 22 were lab managers.

o   The Texas Medical Center is the largest medical center in the world and the TMC institutions conduct more than $1.5 billion in research annually.

o   Last year, the BioResearch Product Faire™ Event at The Texas Medical Center attracted 452 attendees. Of these attendees, 148 were purchasing agents, professors and post docs, and 78 were lab managers.

Biotechnology Calendar Inc. is a highly respected full service event marketing and planning company that has been producing life science tradeshows at research universities for more than 20 years.