Certain types of fungi eat things that we would rather not have in our water supply, like bacteria. Since earlier work had strongly suggested that mycelia (networks of fungi) could be purposed for filtration, this study chose to use a really threatening pathogen, E. coli, and to test filtration under storm water runoff conditions, which in Washington State are significant. The goal was to meet current industry standards for water purification under laboratory conditions. The mycofilter had to be durable, "not significantly impacted by excessive heat, cold, saturation, or dehydration," as well as having a robust filtration capacity.

Of the 30 varieties of fungi the team started out testing, one in particular demonstrated the characteristics they required. The process of testing involved innoculating a clump of wood chips and straw with the mycelium and subjecting it to an effluent containing the bacteria in both sediment-bound and free-floating forms. Subsequent water quality testing showed that the E. coli was virtually entirely removed. Moreover, the mycofilters were just as successful at removing the pathogen when they were reused, demonstrating the resiliency of the mycostrain. 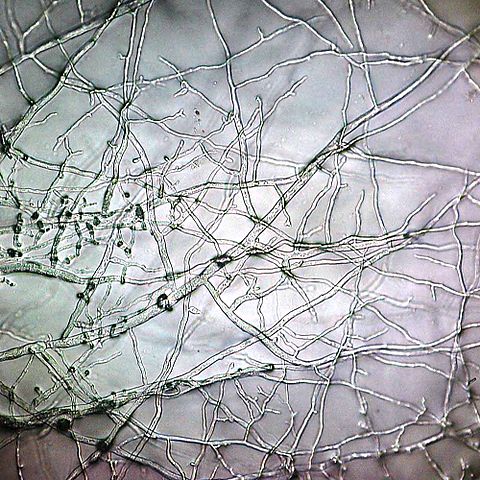 [Mycelium, or fungal network, under a microscope, courtesy of Wikipedia]

Water purification is a serious problem worldwide. While good filtration systems exist, they can be expensive to implement and maintain, particularly to stand up to stormwater conditions. Chemicals such as chlorine are regularly utilized to kill off pathogens, but then the chemicals typically need to be removed or neutralized. The elegance of mycofiltration is that performs its task naturally and adds no further contaminants to the water. In fact, the fungi actually neutralize the bacteria in the process of consuming it as food, so that the used mycofilters can be composted later without toxifying the soil. Finally, mycofiltration is inexpensive. Win-win.

Earlier successful uses of fungi for purification include bioremediation of petroleum in contaminated waters, such as after an oil spill. "Mycobooms" created by filling porous bags with mycelium-infused straw and floating them in oil-spill areas ate the floating petrol. The resulting fungi that grew from the booms were actually edible.

Mycological enthusiasts like Stamets have long sung the praises of fungi for environmental and health benefits. What is perhaps unique about this project with the Washington State University team is that it caught the attention and funding of the EPA, and that the testing was done to see if mycofilters could perform up to governmental standards for public water sources. Innovative, collaborative biotechnology research like this, with government, academic, and private sector participation is more than a little promising for a sustainable future, as well as business growth in Washington.

If you are a life science researcher or laboratory manager in need of new research tools, or a lab supply vendor in the Pullman area interested in the WSU research marketplace, plan on attending Biotechnology Calendar Inc.'s Pullman BioResearch Product Faire™ trade show at Washington State University on October 22, 2013.

For more information on the WSU marketplace an on exhibiting, click the button below.