Algae research is a well-funded subject for science researchers, especially at Ohio State University. According to The Columbus Dispatch, Ohio State University has received $8.7 million in federal funding for algae-related projects. The U.S. Department of Energy gave $7 million to researchers interested in using waste water to grow algae biofuels, while the National Science Foundation gave $1.5 million for a project concerned with discovering the environmental impact of hazardous algae on Lake Erie. The project researchers are specifically interested in algae’s effects on climate change. Ohio State University researchers also received $150,000 from the Ohio Sea Grant Program to study the liver toxin concentrations on Lake Erie due to blue-green algae.

Federal funders give millions of dollars to researchers studying algae, both its environmental impact and its potential use as biofuel, every year. University researchers across the country are interested in learning more about how algae’s toxic effects on lakes’ wildlife and water quality can be neutralized, and they also aim to refine the process of making algae usable as fuel. In 2010, the U.S. Department of Agriculture gave close to $17 million to science researchers working on projects to keep phosphorus and nitrogen from washing off farm fields. Other organizations, such as Ohio’s Third Frontier science and technology grant program and the National Oceanic and Atmospheric Administration, also give research funding for projects concerned with algae. In recent years, federal research funding organizations have contributed more than $115 million specifically for algae biofuel research across the United States. 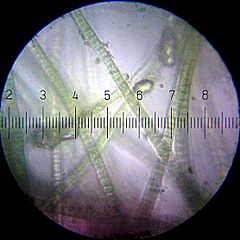 In addition to receiving a wealth of funding for algae research, Ohio State University also received $185.3 million of research funding from the NSF and NIH in 2012. Of the $44.2 million in NSF funding, $6.9 million went towards bio research projects alone. These NSF-funded projects span a number of disciplines within the bio field, including plant genome research, genetic mechanisms, cellular dynamics and function, physiology and structural systems, molecular biophysics, neural systems, systems and synthetic biology, systematics and biodiversity science and living stock collections. We have spotlighted the top five-funded bio projects broken down by funding organization, project title and research funding below:

Clearly, a great deal of research is being conducted on both algae-specific projects and in the bio field in general at Ohio State University. Given the millions of dollars of NSF and NIH  research funding and the funding statistics for algae studies alone at Ohio State University, lab suppliers and biotechnology vendors may want to take advantage of Biotechnology Calendar, Inc.’s Columbus BioResearch Product Faire Event on August 8, 2013 to market their products at the richly-funded Ohio State University. Biotechnology Calendar, Inc. is a full-service science research marketing and event-planning company that organizes trade shows and events at top research institutions across the country. For more information on our Columbus BioResearch Product Faire Event, or to view more funding statistics for Ohio State University, click on the button below. If you’re interested in attending a trade show closer to home, we encourage you to check out our 2013 calendar of events.