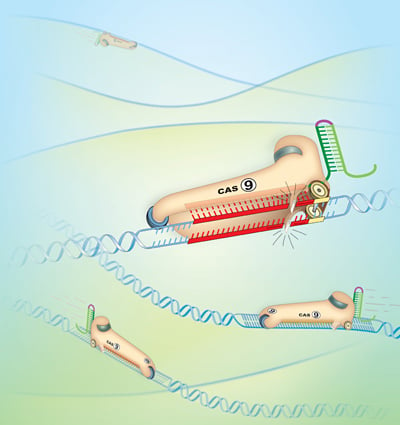 [The bacterial enzyme Cas9 is the engine of RNA-programmed genome engineering in human cells. Image courtesy of The Doudna Lab at UC Berkeley]

Cas9 is an enzyme that Doudna discovered while studying bacterial immune systems, specifically bacteria that had learned how to snip DNA from viral invaders and introduce it into their own DNA sequence, which would trigger an RNA response inactivating it. From that beginning a few years back, the team learned how to combine Cas9 with strands of RNA to create a biological machine that can target a specific piece of DNA (say, a damaged sequence), slice it open, and insert a replacement gene. According to Doudna:

“The beauty of this compared to any of the other systems that have come along over the past few decades for doing genome engineering is that it uses a single enzyme. The enzyme doesn’t have to change for every site that you want to target – you simply have to reprogram it with a different RNA transcript, which is easy to design and implement.”

The two other genome editing technologies that have emerged in the past few years rely on what are known as zinc-finger nucleases and TALEN (Transcription Activator-Like Effector Nucleases) proteins. While one company working with zinc-finger nucleases, Sangamo Biosciences, has already announced it may be able to halt the development of AIDS in HIV-positive individuals with their gene therapy, the Cas9-RNA method could do the same genetic surgery more simply. TALEN, too, may not be able to compete with Cas9 technology. In one of the three recent articles to come out, the one authored by illustrious Harvard geneticist George Church (see our December blog) in ScienceExpress (Jan.3, 2013) found the Cas9-RNA complex to be easier to make and five times more efficient than TALEN. The Church article is titled RNA-Guided Human Genome Engineering via Cas9, and reports successfully on experiments using the RNA technology to cleave and repair human genes.

The latest Doudna article, with co-authors Martin Jinek, Alexandra East, Aaron Cheng and Enbo Ma, RNA-programmed genome editing in human cells, is set to publish in the online journal eLife. A further article exploring the life science advance is Multiplex Genome Engineering Using CRISPR/Cas Systems, by Dr. Feng Zhang and others out of Boston, also in the Jan.3 ScienceExpress. 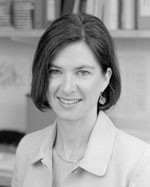 Dr. Jennifer Doudna is a member of the departments of Molecular and Cell Biology and Chemistry at UC Berkeley, the Howard Hughes Medical Institute, and Lawrence Berkeley National Lab, along with the National Academy of Sciences, and the American Academy of Arts and Sciences. The Doudna Lab is also affiliated with QB3 (The California Institute of Quantitative Biology) and the SBI (Synthetic Biology Institute) at UCB. The Doudna Lab studies basic biological processes involving RNA molecules, with a current focus on:

[Photo of Dr. Doudna courtesy of the Doudna Lab page]

Biotechnology Calendar, Inc. looks forward each year to meeting with researchers from UCB's life science community and its affiliates on campus at its annual Berkeley BioResearch Product Faire tradeshow event, to be held next on June 5, 2013. For information on exhibiting, and to receive a free funding report for UCB, click here: