Fishing for Leads at the University of Wisconsin

A little-known fact about the University of Wisconsin, Madison is their emphasis on fish research. In fact, according to an Isthmus article, the university uses and keeps over 400,000 fish: more than the rest of their three dozen species combined. The University of Wisconsin’s research on fish is extensive, and scales from regulating the waterways they travel through to the invasive dangers they face.

In America, fisheries are managed on a state by state basis. This means that each individual state takes its own data and sets its own rules as to what sort of fish can be caught and to what extent the permitted fishes can be harvested. Sometimes this system works well, but many times the spotty data available on fish populations and migrations leads to inconsistencies in state regulation.

Take for example the case of the American paddlefish (above, courtesy of Wikimedia Commons and the US Fish and Wildlife Service), which is vital to the international caviar industry and thus is a very valuable fish. They are known to live in the Ohio River, which has banks on both the states of Ohio and Kentucky. In Ohio, fishermen and fisheries are prohibited from catching paddlefish, which are classified as “threatened.” However, no such regulation exists in Kentucky, and in fact paddlefish are harvested for caviar on that side of the river. As one might guess, inconsistencies like this are often the root of and legal issues. For instance, some fishermen from Kentucky “got in huge trouble” with some Ohio officials earlier this year for paddlefish fishing, according to University of Michigan postdoctoral fellow Brenda Pracheil.

Pracheil believes the solution is to implement “swimways,” which would help monitor the population and migration patterns of river-traveling fish. Similar constructs called flyways are already implemented to track bird movement, and Pracheil thinks it is now necessary to extend the practice to fish. She and her UW lab are working on compiling such a database to allow for uniform fishing regulations and a better understanding of annual fish behavior.

In the more tranquil lakes of northern Wisconsin, another drama is playing out, this time not between fishermen but between the fish themselves. Rainbow smelt, a small sardine-sized fish found in around 25 lakes in Wisconsin, are an invasive species that were accidentally introduced to the area some eighty years ago. They love cold water and so stay near the bottom of the lake. In the words of UW limnologist Jake Vander Zanden: “Normally, you have two distinct habitats, one at 40-45 degrees Fahrenheit at the bottom of the lake and another that is warmer at the top.” 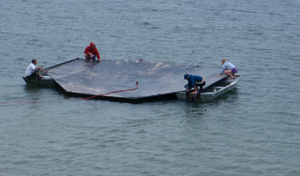 What Vander Zanden and his team have found is that the only fish that depends on the lower, colder habitat is the rainbow smelt. So they came up with the logical and environmentally friendly idea of mixing the lake to make it uniformly warm. Six trampoline-sized membranes called GELIs, short for Gradual Entrainment Lake Inverters (pictured left, courtesy of crystallakemixing.com), were raised and lowered, stirring the water until the lake was effectively mixed. As Vander Zanden puts it in a recent UW article,

“This is actually a much more efficient lake mixing technology than current methods…We were able to bring the entire lake to about 70 degrees Fahrenheit.”

So far, the disturbance of their natural habitat has made the smelt more vulnerable to gulls and other predators, and the stress will likely inhibit their reproductive energy for the next breeding season. While the GELIs didn’t immediately kill off the rainbow smelt, they appear to be a step in the right direction. In addition, they provide researchers with an insight on the possible future effects of global warming.

Biotechnology Calendar, Inc. will be visiting the University of Wisconsin for two of our BioResearch Product Faire™ events next fall. Our Madison University Research Park BioResearch Product Faire™ will take place on September 4th, 2013, and then the next day will see our Madison BioResearch Product Faire™.  Biotechnology Calendar is a full-service event marketing and planning company producing on-campus, life science research trade shows nationwide for the past 20 years. We plan and promote each event to bring the best products and services to campuses across the country, ensuring that scientists have access to the latest tools and technologies available for their research labs. You can reserve space at one of these Wisconsin events by using the buttons below, or to find a show closer to home, please look at our 2013 schedule.