In short, he determined that a suppressed immune response might be the base cause of Alzheimer's disease. While experimenting with the memories of lab mice, this theory was created based on the significant memory and learning improvements in Alzheimer's mice once their immune systems were aided by the healthy immune cells of normal mice.

A majority of this new research is based on Professor Ethell's 2002 report which determined that a protein, beta-amyloid, increases the number of immune suppressors, fas ligand, and most importantly that in cases of extensively suppressed responses to beta-amyloid, Alzheimer's disease is exhibited. What is most remarkable about this find at UC Riverside is that it was the first time that a researcher anywhere had linked beta-amyloid to Alzheimer’s and learning/memory. 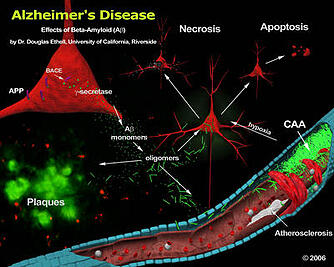 Another very important person involved in this research is Professor Iryna M. Ethell, the associate professor of biomedical sciences at UCR and the lead author of the research paper on this discovery. “Our work, done on mice, shows that if beta-arrestin is removed from neurons, this loss of synapses is prevented.  But we also know that beta-arrestin is required for normal learning and memory; so a fine balance needs to be established. This balance could be easily achieved by pharmaceutical drugs in the future.”

Since this discovery in 2006, many different approaches have been attempted in order to apply this information to actually reverse and eliminate Alzheimer's disease in human patients. One study found that Alzheimer's mice that were injected with beta-amyloid vaccinated immune cells from healthy mice improved monumentally on memory tests, and these improvements lasted 1-2 months after the injection. However, in the search for an Alzheimer's cure, studies may begin to shift away from bets-amyloid injections and instead to slightly altering a body's immune response to that protein.

In 2012, these researchers at UC Riverside continue to work tirelessly with this lead in order to find a cure to Alzheimer's disease one day.

If you are a Riverside, California researcher looking for new research equipment, or a research supplier who is interested in networking with researchers, like the ones mentioned in the article, and supplying new science programs at UC Riverside, plan on attending Biotechnology Calendar, Inc.'s BioResearch Product Faire™ in Riverside on August 22nd of this year. For more information about our upcoming vendor show click the button below.