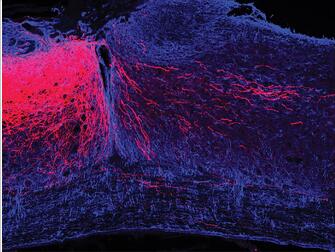 Dr. He's neurological stem cell research focuses on the regenerative ability of mature neurons, specifically those of the optic nerve and spinal cord, and their ability to recover from injury.  His recent work on the central nervous system (which he would continue at UCB) targets the nerve projections that carry signals up and down the spine. These projections, called axons, can be damaged during a spinal cord injury, preventing them from carrying signals. The object of Dr. He's research is to develop stem cell technologies to bridge the site of the injury and restore neural transmission function.

[The image at right, from an article in Nature Neuroscience, shows the corticospinal tract of a rat, two months after injury and treatment with a novel procedure developed by Dr. He's lab.]

Dr. He has lived in the San Francisco Bay Area once before, when he was a postdoctoral fellow with Marc Tessier-Lavigne at UC San Francisco.  Dr. He has already in his young career been named a Klingenstein Fellow in Neuroscience, a John Merck Scholar and a McKnight Scholar.

The CIRM funding for recruitment of a prominent researcher falls under the CIRM's Research Leadership Award program.  If Dr. He accepts Berkeley's offer for the position, he will become the third such recipient of the award.  The first, in April 2010, was Dr. Robert Wechsler-Reya, who received a $5.9M award to move his stem cell research lab from Duke University to the Sanford-Burnham Medical Research Institute at UC San Diego.  The second was Dr. Peter Coffey from England, who was given a $4.8M award in October 2010 to pursue his research at UC Santa Barbara.

Biotechnology Calendar, Inc. will be holding its 15th Annual Berkeley BioResearch Product Faire event on the UCB campus on June 6, 2012.  This networking opportunity brings life science researchers together with laboratory equipment suppliers to discuss the latest technologies in lab science.  For information on exhibiting, click below:

Our 2012 shows at other UC campuses refererenced in this article include: