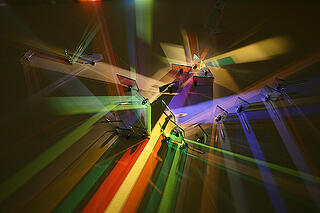 The $62.5 million Linus Pauling Science Center on the corner of 29th and Campus Way in Corvallis, Oregon, is having its grand opening on Friday, October 14, 2011.  The new 105,000-square-foot building will house the Linus Pauling Institute, chemists from the College of Science, and contain classroom and laboratory space for students and researchers studying chemistry, biology, and the life sciences.  It is the largest donor-supported building project in the history of Oregon State University.  In addition to providing building funds, some 2,600 other donors have made gifts totaling more than $21 million to support the educational and research programs that will be housed in the building.

[Photo above/right of light painting by artist Stephen Knapp is one of four being installed in the new Pauling building (photo: Theresa Hogue)] 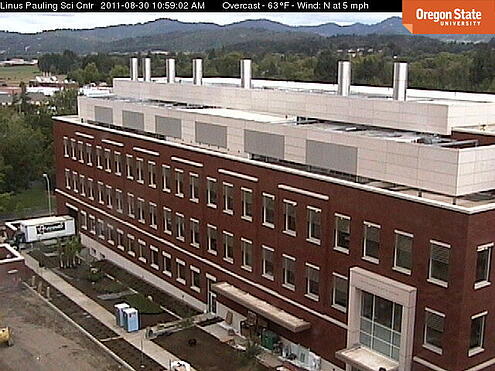 Dr. Linus Pauling, an Oregon native and OSU alum, was, after Einstein, probably the most famous, vocal, and productive scientist of the 20th Century.  A few notes on Pauling's remarkable life and scientific career: 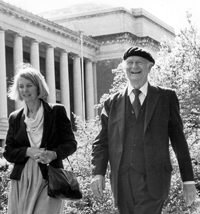 In 1973, Pauling co-founded the nonprofit biomedical research organization for micronutrient research that now bears his name. The Linus Pauling Institute of Science and Medicine was established primarily to conduct research and education in orthomolecular medicine, following his belief that nutrition could prevent, ameliorate or cure many diseases, slow the aging process, and alleviate suffering.  When Pauling died in 1994, he left more than 400,000 journals, scientific writings, papers, models, and other scientific memorabilia to his undergraduate alma mater, Oregon State University. The collection makes up one of the great scientific archives of the 20th century. The assets of the Linus Pauling Institute of Science and Medicine (which was originally at Stanford, where Pauling was emeritus professor to the end) were used to establish the Linus Pauling Institute as a research institute at OSU in 1996.

(Photo of Linus Pauling and his daughter on a visit to the OSU campus, courtesy of Oregon State University)

Biotechnology Calendar Inc. will also be on the OSU campus in Corvallis the second week in October, holding our 6th Annual BioResearch Product Faire event on the OSU campus October 12, 2011.  For research funding data on OSU and information on the October tradeshow/marketing event, click the button below: