Research on memory is very delicate business. The prospect of increasing memory capacity and restoring lost recollections sounds more like magic than science. Despite this, a group of researchers from the University of California, San Diego has found a way to stimulate neural networks in rats in order to erase and restore their memories.

In order to produce a “sample memory,” the team exposed rats to a particular kind of light while delivering an electric shock to their feet. Eventually the rats associated the light with pain and became afraid of the light. Next, the team used a sequence of optical pulses to weaken the neural network that stored the memory. After this, the rats were no longer afraid of the light, implying that the memory had been erased.

As if erasing memories wasn’t impressive enough, the team next applied a reversing sequence of optical pulses to the same neural network in an attempt to reconstruct the lost memory. To their surprise, the rats again displayed fear in presence of the light. That is, they re-activated the memory they had erased. Senior author Roberto Malinow, MD, PhD, sums up the experiment’s results succinctly and powerfully: “We can form a memory, erase that memory and we can reactivate it, at will, by applying a stimulus that selectively strengthens or weakens synaptic connections.”

Manilow believes this research may have an application in treating Alzheimer’s disease, in which a beta amyloid peptide weakens neural networks. Since this weakening is similar to the memory erasure used in the first part of the experiment, there is a chance that the same recollection process will work for Alzheimer’s as well. “Since our work shows we can reverse the processes that weaken synapses, we could potentially counteract some of the beta amyloid’s effects in Alzheimer's patients,” Manilow says in a UCSD article. 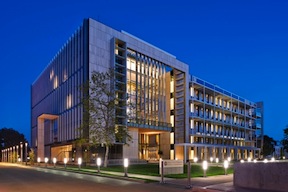 Another noteworthy development at UCSD is the completion of the UCSD Biomedical Research Facility (image courtesy UCSD), a new 196,000-square-foot building that amounted to a $113 million project. This facility aims to provide a common working area for multi-departmental programs under the common category of bioresearch.

Biotechnology Calendar, Inc.  makes an appearance at the University of California, San Diego campus each year for its San Diego Biotechnology Vendor Showcase™, held next on August 28, 2014. If you're in the area, we will also be hosting the Riverside BioResearch Product Faire™  on the UC Riverside campus the day before, August 27, 2014. Biotechnology Calendar, Inc. is a full service event company that has produced on-campus, life science research trade shows nationwide for the past 20 years. If you are a university researcher or a laboratory product vendor, consider attending one of our on-campus trade shows: here is our 2014 schedule of events.