Health screens for HPV infection can be challenging in developing countries, where women in rural areas have very limited access to health services. The incidence of cervical cancer in Nepal is 24.2 per 100,000, which makes Nepal a country with one of the highest cervical cancer rates in South Asia.

Researchers from the University of Alabama at Birmingham have examined the prevalence of high-risk HPV in Nepal, and found that one method of screening for the infection can be effective. This research is led by Sadeep Shrestha, PH.D., who is associate professor in the University of Alabama at Birmingham Department of Epidemiology. Professor Shrestha has been working on an investigation of HPV prevalence and screening methods in a remote district called Accham in Far Western Nepal for many years.

In his study, Professor Shrestha discovered that self-collected samples for HPV and cervical cancer were feasible even in a remote area among illiterate women. Most of these illiterate women had never visited a medical center. He also learned that the prevalence of HPV in the study was an underestimate.

“We realized that many other women could not attend the health camp due to distance to the camp, potential health issues, or even because of cultural taboo. ” Professor Shrestha states in his new report published to PLOS ONE that investigated HPV prevalence in developing countries. “Nepal has a high prevalence of HIV, and we believe that this region could also have a high prevalence of HPV. Multiple one-day health camp and creative designs to enroll women will be needed to prove this.”

The infrastructure for testing for HPV in Nepal is not fully developed. Professor Shrestha’ s study so far has a very limited budget and a limited sample size. The collected samples were tested in the United States, but Professor Shrestha believes that the model of putting screening projects into a one-day health camps, coupled with a self-sampling approach to HPV, would be beneficial for the Nepalese people and the development of better local testing facilities in Nepal would help improve the sustainability of routine HPV testing in the future.

Today’s health challenges are global, involving diseases that must be understood at the cellular level and addressed at the community level. The University of Alabama at Birmingham is embracing these challenges and building the next generation of bold professionals leading innovation in public health. Each year the University of Alabama at Birmingham attracted more than $433 million in research funding in key areas of health sciences, which helps the UAB health system become one of the largest academic medical centers in the United States. 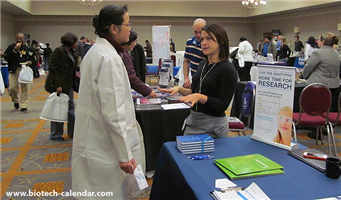 Last year, the BioResearch Product Faire™ Event at the University of Alabama attracted 326 attendees. Of these attendees, 87 were purchasing agents, professors and post docs, and 58 were lab managers. These attendees came from 40 different research buildings and 45 on-campus departments.

If you are a laboratory supply company interested in participate in the 15th Annual BioResearch Product Faire™ Event at the University of Alabama at Birmingham on November 13th 2014, please click the button below.

There are more BioResearch Product Faire™ Events available at different institutions across the nation. Please read the National Show Schedule for 2014 for more event information.