Sepsis kills more people every year in the United States than AIDS, Prostate cancer, and Breast cancer combined. The mortality rate for sepsis is 28-50%. The condition causes one in every four patients in a hospital emergency room to be there, and millions of people die from it around the world every year. It can develop from:

Sepsis is commonly called "blood poisoning". When a dysfunctional immune responds to endotoxins that are release from the cell walls of bacteria, the condition can quickly lead a modest infection to a whole-body inflammation, which causes multiple organ failure and death.

The treatments for sepsis sometimes can be very successfully with antibiotics, but they are not always effective. A big part of the problem with sepsis is that it moves so rapidly. By the time it appears, it is often too late to treat it.

In pioneering research at Oregon State University, Professor Higgins and his research team used Microchannel Technology and Special Coatings to create a small device, about the size of coffee mug, through which blood could be processed. This small device will help remove the problematic endotoxins and prevent sepsis.

In the system developed at Oregon State University, blood can be pumped through thousands of microchannels that are coated with what researchers call “pendant polymer brushes,” with repeating chains of carbon and oxygen atoms anchored on the surface. This helps prevent blood proteins and cells from sticking or coagulating. On the end of each pendant chain is a peptide, or sometimes called bioactive agent, which binds tightly to the endotoxin and removes it from the blood. Blood then moves directly back to the patient.

More than $20 billion has been spent on sepsis since 2010 in the United States. It the most expensive cause of health problems that require hospitalization in the world. The progress of this noverl technology has been reported on by several recent professional publications.

Biotechnology Calendar, Inc. is providing an opportunity for laboratory supply companies to connect with such a richly funded market at the 9th Annual BioResearch Product Faire™ Event at Oregon State University, Corvallis on September 10th 2014. 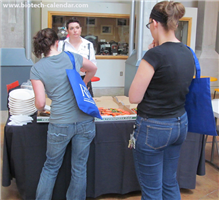 If you are a laboratory supply company interested in exhibiting at the 9th Annual BioResearch Product Faire™ Event at Oregon State University, Corvallis on September 10th 2014, please click the button below for more information.

There are more events available at different institutions across the nation. Please read the National Show Schedule for 2014.