Amyotrophic Lateral Sclerosis is a debilitating and terminal disease. It was first identified as a progressive and fatal neurodegenerative disease in the late 1800s and gained international recognition in 1939 when it was diagnosed in American baseball legend Lou Gehrig. It’s known to be caused by motor neurons in the spinal cord deteriorating and dying, and has been traced to mutations in copper, zinc superoxide dismutase, or SOD1. Superoxide dismutase is an antioxidant whose proper function is essential to life.

When SOD1 is lacking metal co-factors, it becomes toxic, leading to the death of motor neurons. The metals, copper and zinc, are very important in stabilizing this protein.

ALS is primarily happening in the spinal cord, which is one of the most difficult places in the body to absorb copper. Copper itself is necessary but can be toxic, so its levels are strictly controlled in the body. In humans, no therapy for this disease has ever been discovered that could extend lifespan more than a few additional months because it is very difficult to deliver copper selectively into the cells in the spinal cord that actually need it.

In a new study published this month in the Journal of Neuroscience, researchers from Oregon State University showed in laboratory animal tests that oral intake of the copper compound significantly extended the lifespan and improved the locomotor function of transgenic mice that are genetically engineered to develop Lou Gehrig’s disease.

The compound restored a proper balance of copper into the brain and spinal cord. It is stabilizing the superoxide dismutase in a mature form, which improved the function of mitochondria. The novel treatment extended the lifespan of affected mice by 26%, and is expected to achieve even more extension.

This research has been funded by multiple institutes, including:

Create a Connection with OSU for Laboratory Supply Companies 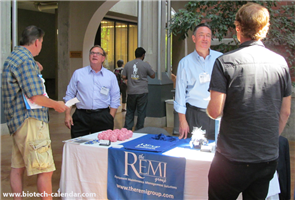 If you are a laboratory supply company interested in exhibiting in the BioResearch Product Faire™ Event at Oregon State University on September 10th 2014, please click the button below:

There are more events available at different institutions across the nation, please read the National Show Schedule for 2014.