The holiday season can be a stressful one, making it an important time to remember how to relax. For some people, this involves meditation, the discipline of the mind with the goal of reducing stress or building internal energy. While it may seem like merely a placebo or “positive thinking” effect to skeptics, a growing body of evidence supports the tangible health benefits of meditation. Curious researchers at the University of Wisconsin, Madison recently decided to explore meditation from a biotechnological standpoint and analyze what effects it actually has on humans.

Leading the study was researcher Richard J. Davidson (left), who also founded the Center for Investigating Healthy Minds (CIHM) on campus. (The CIHM is part of the Waisman Center at the University of Wisconsin, which we recently discussed in regards to stem cell research.)  Davidson set out to determine how meditation affected gene expression in the immediate short term.

To do this, he had one group of people meditate for eight hours while another group did quiet, non- meditative activities. After this time, Davidson found that the two groups expressed some of their genes differently, which was surprising since these genes were expressed the same way in both groups at the start of the study. This means that the difference in gene expression had nothing to do with the people themselves (specifically, whether and how often they meditated in their daily lives), but rather were a direct consequence of the act of meditation.

So what genes were expressed after meditation? "Most interestingly, the changes were observed in genes that are the current targets of anti-inflammatory and analgesic drugs," according to Perla Kaliman, a bioresearcher from the Institute of Biomedical Research of Barcelona, Spain. Meditation reduced the expression of inflammatory genes to form an overall soothing effect. Davidson was surprised at how quickly the genes responded to meditation, but noted in a University of Wisconsin article that “genes are quite dynamic in their expression and these results suggest that the calmness of our mind can actually have a potential influence on their expression." 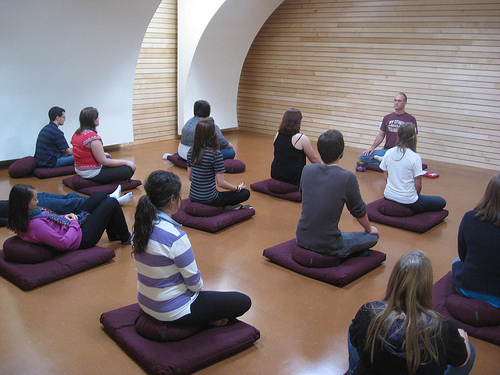 (A meditation session at CIHM, which houses its own meditation center. Courtesy CIHM)

Davidson and Kaliman are impressed with the results of the study and plan to work next to pinpoint situations where meditation may actually be the best prescription. As Kaliman puts it, "Our findings set the foundation for future studies to further assess meditation strategies for the treatment of chronic inflammatory conditions." Perhaps a journey into meditation would be a beneficial New Year’s resolution after all.

This study was funded in part by grants from the National Center for Complementary and Alternative Medicine, the Fetzer Institute, the John Templeton Foundation, and an anonymous donor to Davidson himself. For further reading regarding funding for the University of Wisconsin, Madison and its studies, click on the link below: