Cyanobacteria are a unique form of bacteria that can create their own source of energy through photosynthesis and by fixing carbon molecules and transforming them into fuel in tiny chambers called carboxysomes. Using a new imaging technique that essentially makes time lapse videos of these cellular processes, they were able to observe how these chambers are built and function. They found that Cyanobacteria construct these chambers through a unique process never seen in other animal, plant or eukaryotic cells.

Cheryl Kerfeld, the senior author for the research, summed up the unique characteristics of this cellular process. She said, “The carboxysome, unlike eukaryotic organelles, assembles from the inside out.” Kerfeld is a former researcher at the Department of Energy Joint Genome Institute (DOE JGI) who now works through UC Berkeley and Michigan State University. The findings from the project were published on November 21, 2013 in the journal Cell. They shed light on the processes within bacterial cells and may have some applications in nanotechnology. 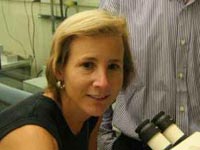 This research is particularly important due to the prevalence of Cyanobacteria throughout the natural world. Although these bacteria are also known as “blue green algae,” they are actually not an algae since they do not have the same complex membrane enclosed internal structure. However, they do have a very simple compartment that is used to capture carbon and convert it into energy. These bacteria actually are a significant player in the earth’s carbon cycle. According to Cheryl Kerfeld, “A significant fraction of global carbon fixation takes place in carboxysomes.” These miniscule bacteria actually play a very important role in staving off rapid climate change by fixing carbon within the bacteria that would otherwise be in the atmosphere as a greenhouse gas. Studying, and in particular being able to image, the ways in which these bacteria fix carbon in their small carboxysomes is particularly important. For the first time scientists have been able to observe one of the most prevalent microscopic carbon fixation processes on earth.

In order to observe this process, Jeffrey Cameron, the first author of the study, first developed a strain of mutant Cyanobacterium that had been altered to allow florescent markers to be introduced within the cells to track the development of the carboxysomes. The bacteria incorporated the glowing florescent markers into their newly created carboxysomes, allowing the researchers to observe the process.

Throughout the development of these cells the researchers took photographs at regular intervals using a transmission electron microscope. These images were then combined to create a time lapse video that shows the development of these cells. They were able to observe that, in contrast to other forms of bacteria, the Cyanobacteria construct the chambers where carbon is fixed and processed from the inside out. The resulting video created by the researchers is embedded below:

This is especially significant as it is the first time researchers have been able to observe a bacteria construct one of its internal structures, called organelles. Kerfeld stated that the imaging technique that uses florescent markers in this way has far reaching applications and is a major advance over previous methods. Kerfield stated that the researchers could potentially use their understanding of this process in the bacteria to design nano-scale reactors that could fix carbon using a similar process. Not only has this research provided important insight into a very important carbon fixation process, but it could also spawn a whole new research direction with exciting implications for the fight against global warming.

If you are a lab supplier interested in exhibiting at UC Berkeley life science marketing events, Biotechnology Calendar, Inc. invites you to attend our Berkeley BioResearch Product Faire™ Event on June 4th, 2014. For more information on our UC Berkley event, or to get funding statistics on the university, click on the button below.