A human’s first instinct upon seeing a scorpion is to get away from it as fast as possible. The grasshopper mouse, on the other hand, routinely feeds on bark scorpions, as seen in the video below. Despite the venomous nature of their prey, the mice suffer no side effects from their mealtime and aren’t even that bothered while they’re eating. The secret of their immunity is inspiring researchers at Michigan State University to look into the medicinal properties of this mouse’s body.

You can see in the video that the grasshopper mouse doesn’t mind being stung repeatedly by the scorpion, even though it’s being injected with venom. For reference, the venom of the bark scorpion is not always lethal, but it consistently induces searing pain and can lead to seizures or paralysis, even in humans. This tiny mouse has evolved an immunity to the toxin, but it’s the exact nature of this immunity that has piqued the curiosity of bioresearcher Ashlee Rowe, assistant professor of neuroscience and zoology at Michigan State University.

“This venom kills other mammals of similar size,” she says in a recent MSU article. The venom is powerful enough to cause temporary total paralysis in small mammals, in which time they die from asphyxiation. However, the grasshopper mice are immune to this paralyzing effect. Rowe and her team verified this by directly injecting venom into the mice with no noticeable result. 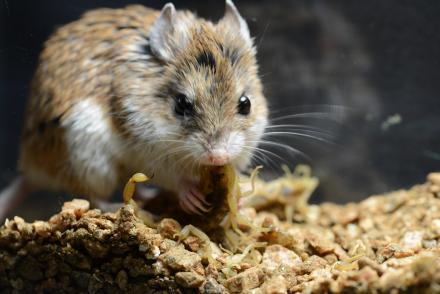 One detail still felt out of place to Rowe: though the bark scorpion’s sting is known to cause great amounts of pain to all sorts of mammals, the grasshopper mouse seemed to be immune to the physical pain as well. “I’d see the mice get stung, and they’d just groom a little bit and blow it off,” she observed. Closer investigation revealed that the mouse produced a protein that bound to venom molecules as they entered the body. This prevented the venom from activating the pain receptors and even caused the mouse to go entirely numb for a short period of time.

As an interesting evolutionary note, this is the first instance of an adaptation that prevents an organism from feeling pain. Usually pain is a fundamental part of understanding when one is in a dangerous situation. Rowe theorizes that since the scorpions comprise such a large part of the mouse’s diet, it was necessary for the mouse to go numb in order to finish its meal. The MSU team is looking forward to producing new anesthetics and analgesics using the unique case of the grasshopper mouse. This study was supported by grants from the NSF and NIH. You can read a full report on funding information for MSU with our Funding Statistics report, below:

Biotechnology Calendar, Inc. pays a visit to Michigan State University each year for the East Lansing BioResearch Product Faire™, a life science event held right on the university campus. Biotechnology Calendar is a full service event company that has produced on-campus, life science research trade shows nationwide for the past 20 years. We plan and promote each event to bring the best products and services to the finest research campuses across the country. If you are a university researcher or a laboratory product vendor, consider attending one of our on-campus trade shows: here is our 2013 schedule and 2014 schedule.