Harvard Medical School is a funding and research mecca that attracts millions of dollars in grants every year.

The Harvard Medical School is having a blockbuster year when it comes to new research breakthroughs and new research funding. In 2011, Harvard had a total operating budget of $655 million, with research grants and contracts contributing 34%, or $304 million. Each year, the NIH awards a significant portion of its research funding to Harvard Medical School. In 2011, Harvard received $200 million in NIH research grants, which is two-thirds of its 2011 research and grant budget.

Christmas came early for Harvard researchers when the NIH awarded the Medical School $202 million. This represents a gain of more than $2 million from the previous year. With an infusion of NIH money, Harvard scientists were able to work on 428 new and current projects in 2012.

NIH grants help keep Harvard Medical School working up to its potential, with its large medical faculty numbering almost 12,000 people. Each day, faculty are busy training the next generation of doctors and researchers, with more than 9,376 residents and postdoctoral fellows learning and working at Harvard. The future looks bright due to Harvard's medical faculty constantly improving our health knowledge through its frequent research breakthroughs.

Harvard also looks at the funny side of science, as it recently hosted the Ig Nobel Prizes for 2012. The Ig Nobel Prize is given to fun, but absurd and improbable research projects. Some of the projects that won this year include research on the movement of hair in ponytails, the brain activity in dead salmon, how coffee sloshes while walking and using the smell of wasabi as an alarm.

We have provided a helpful link to more Science Market Update blogs on Harvard. 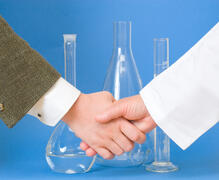 Biotechnology Calendar, Inc. will be at the Longwood Medical campus on February 21, 2013 for our 7th Annual Boston BioResearch Product Faire™ Event.  With life science researchers from Harvard Medical, Dana-Farber, Joslin Diabetes, Children's Hospital, MGH and other institutions in the Longwood Medical neighborhood attending, this is an excellent opportunity for scientists and laboratory equipment suppliers to network and discuss their research needs and solutions.

Click below for information on exhibiting at Longwood Medical and receive a funding report on Harvard University: