Sometimes eradicating the tumor is only a partial defeat for cancer. Tumors release cancerous cells into the bloodstream that can form new tumors. A team at the University of California, Los Angeles has devised a clever strategy for detecting and collecting these errant cells so they can be stopped and studied to prevent further harm.

To capture the wandering cancer cells, UCLA professor of molecular and medical pharmacology Hsian-Rong Tseng imagined a sort of filter that would detain cancer cells as the blood passed through. He brought his idea to life in the form of the NanoVelcro Chip, which, as the name implies, is a small chip the size of a postage stamp covered with tiny Velcro-like nanowires. These wires are 1000 times thinner than a human hair and they are coated with antibodies that recognize floating cancer cells and bind to them.

The NanoVelcro worked excellently at grabbing tumor bits, but a problem arose when the researchers tried to extract them for study. The wires held on so tightly that pulling off the cancerous cells caused them to simply break apart. To solve this, the team utilized a technique known as laser capture microdissection, which did work, but at a large cost in time, labor, and specialized machinery.

Now Tseng has devised an even better solution. He modified the NanoVelcro Chip to respond to temperature so that it will capture when sufficiently hot and release when comparatively cold. That way, extracting the cells is as simple as chilling the blood sample. 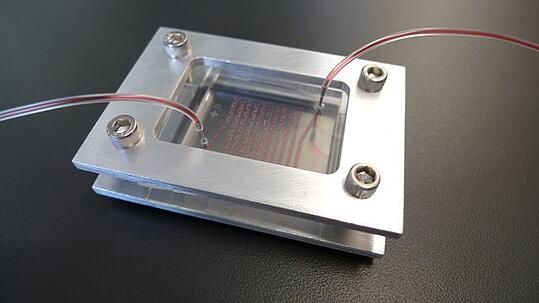 “With our new system, we can control the blood’s temperature — the way coffeehouses would with an espresso machine — to capture and then release the cancer cells in great purity,” said Tseng in a recent UCLA newsroom article. He believes that the technology will replace laser capture microdissection as standard practice in the field.

This research represented a collaboration of worldwide research universities. Funding for the study came from the National Institutes of Health, RIKEN (Japan), Academia Sinica (Taiwan), Sun Yat-sen University (China) and the National Natural Science Foundation of China. For more information on research funding, grants, and awards at Los Angeles, have a look at our free UCLA Funding Report, available via the button below:

Biotechnology Calendar, Inc. makes an appearance at the University of California, Los Angeles campus each year for its Los Angeles Biotechnology Vendor Showcase, held next on October 22, 2015. If you are planning to be in the Southern California area in October, we will also be hosting the Irvine BioResearch Product Faire™ and the BioResearch Product Faire™ Event at the University of Southern California, Health Science Campus and on the previous two days, October 20th and 21st respectively.

Biotechnology Calendar, Inc. is a full service event company that has produced on-campus, life science research trade shows nationwide for the past 20 years. If you are a university researcher or a laboratory product vendor, consider attending one of our on-campus trade shows. You can look at our 2015 schedule of events to find a show at a university campus near you.