UC Berkeley is one of 9 research institutions that will receive funding from NIAID as to develop tests and methods for the rapid detection of antimicrobial-resistant bacteria. A total of $11 million was awarded to six academic institutions and three companies for the first of five years of funding.

According to an NAID press release, the nine research facilities will develop tools to identify certain drug-resistant pathogens, such as E. Coli, that frequently cause infections in health care settings. Advancing the development of rapid and innovative diagnostic tests for identifying and characterizing resistant bacteria is a key goal of the President’s recent National Action Plan for Combating Antibiotic-Resistant Bacteria. 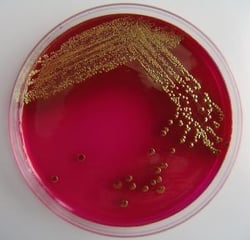 Each of the institutions receiving the NIAID awards will develop a diagnostic tool that identifies and provides corresponding antibiotic susceptibility information for one or more of the following bacteria: Klebsiella pneumonia; Acinetobacter baumannii; Pseudomonas aeruginosa; Enterobacter species; and Escherichia coli (photo inset, courtesy of Renata Horvat).

The researchers hope to develop a test to that will rapidly identify particular species of potentially drug-resistant bacteria in samples of blood, urine, and other bodily fluids or tissues. The process would take a matter of minutes, in contrast to the several days it currently takes to have samples analyzed at off-site laboratories.

The UC Berkeley team consists of researchers from the School of Public Health and the Department of Bioengineering, and is led by Dr. Lee Riley, professor of infectious diseases, and Luke Lee and Niren Murthy, both professors of bioengineering.

“Delay in diagnosis not only contributes to increased patient mortality, but also to the wrong choice of drugs that can further select for drug resistance,” said Dr. Lee Riley, “Antimicrobial resistance is a serious global health threat that is undermining our ability to effectively detect, treat and prevent infections,” said Dr. Anthony S. Fauci, NIAID’s director, in the announcement.

“One way we can combat drug resistance is by developing enhanced diagnostic tests that rapidly identify the bacteria causing an infection and their susceptibility to various antimicrobials. This will help physicians determine the most effective treatments for infected individuals and thereby reduce the use of broad-spectrum antibiotics that can contribute to the drug-resistance problem.” 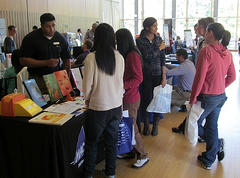 Berkeley is consistently rated among the top institutions in the world for the quality and breadth of its research enterprise, for the scholarly distinction of its faculty, for the excellence of its Ph.D. programs, and for the amount of funding received for support of its research programs.

In addition to the $5.8 million for this project from the National Institutes of Health, UC Berkeley receives hundreds of millions in R&D funding every year. For example:

Lab vendors and biotech suppliers interested in meeting the prominent researchers of UC Berkeley on their own turf will be attending the 18th Annual BioResearch Product Faire™ Event at UC Berkeley on June 3, 2015.

To learn more about attending this popular event free of charge as a life science researcher, or to promote your products as an exhibitor, click below: