Understanding what stem cells do and why they are important has been a popular research topic for many years. Scientists have learned quite a bit about their functions, such as repairing damaged tissues and renewing some normal ones. However, there is no knowledge of where these stem cells originate and how they develop in the embryo.

Recently, a team of researchers from Rockefeller University in New York discovered the mechanism involved in transforming regular cells into stem cells during development.

Researchers already know that clusters of stem cells receive signals from a group of special cells called the "niche". These niche cells reside in a separate location, and the type of signal they transmit determines whether a cell is destined to become a stem cell or serve a different purpose. The niche is also responsible for maintaining populations of adult stem cells. With this knowledge in mind, the Rockefeller team set out to gain a better understanding of how the niche forms.

“Adult stem cells are dependent on the niche for instructions on both how to become a stem cell, and how to control stem cell population size,” explained study author Tamara Ouspenskaia. “The question was, does the niche appear first and call other cells over to become stem cells? Or is it the other way around? Stem cells could be appearing elsewhere first and then recruiting the niche.”

For this study, the research team focused on studying the cell divisions that occur at the hair follicles of mice, a region known to contain active stem cells. Through observation, the team found that there are distinct layers of tissue. Some cells remain fixed in a single layer for their entire life cyle, while other cells have the ability to move around and become stem cells in a new location. Not only is this the earliest known point of development for stem cells, but it also shows that these cells may develop before the niche is formed.

Elaine Fuchs, Ph.D. explained, “This newly identified signaling cross talk provides insights into why these two signals have such a profound impact on skin cancers, where the numbers of cancerous tissue-propagating stem cells are excessive. This work now paves the way for future research into the fascinating and clinically important relation between tumor-propagating and normal stem cells.”

This research was published in the journal Cell on January 14, 2016. 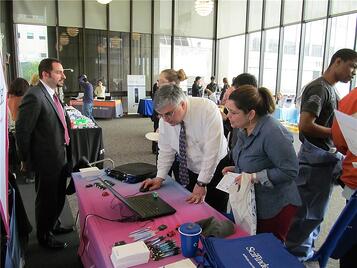 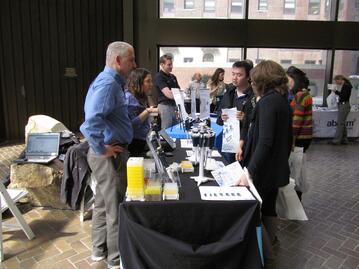 For updated Rock U stats, click the button below:

In the 2015 fiscal year, the university received more than $61.5 million in funding from the National Institutes of Health (NIH). Departments at the University receiving substantial amounts of this funding include:

Interested in marketing lab products and supplies to active life science researchers in the well-funded New York marketplace? If so, exhibit at a BioResearch Product Faire™ Event at Rockefeller University in 2016. These events brings together life science suppliers with researchers, PI's, grad students, lab managers,professors, purchasing agents and other lab staff interested in finding the best and newest equipment and technologies to use in their lab.

Lab suppliers who attend this premiere event are able to:

To learn more about participating in this upcoming event, visit the link below:

Life science researchers are invited to attend this event for free, click below and pre register: