Though experts may disagree on when earth’s supply of fossil fuels will be exhausted, they do agree that it will happen eventually. After all, fossil fuels typically require millions of years of degradation to create. So the race for alternative biofuels is on.

The Department of Energy (DOE) recently awarded the Washington University, St. Louis (WUSTL) $3.9 in research funding to develop bacteria that manufactures renewable biofuels. WUSTL scientists are studying Rhodococcus opacus, a bacteria that grows on toxic compounds, using them as a source of food for the production of biofuels. The goal of this research project is to produce biofuels that can completely replace petroleum-based fuels.

Scientists at WUSTL are creating new biofeul that would be carbon-neutral when burned. Image courtesy of Wikimedia.

Investigators at the university’s School of Medicine and School of Engineering & Applied Science are collaborating to make to make a new biofuel from a toxic waste byproduct of papermaking called lingnin.  Unlike ethanol, which is an alcohol typically manufactured from corn or sugar cane, this biofuel will not compete with food production.

Professor Dantas explained in an article for WUSTL's the SOURCE, “Our team is using a combination of chemistry, systems biology and synthetic biology to try to process lignin plant matter into biofuels that can be added directly to current petroleum-based engines.”

Today’s cars can only burn fuel that contains 10 to 15% ethanol. Otherwise, specialized engines are required for running on fuel blends mostly or entirely alcohol based. Every year, millions of tons of lignin are generated from the papermaking and the lignocellulose-based biofuel industries. Currently, the lignin is only used as a fuel for on-site boiler operations. This project seeks to expand its uses into a fuel that would be chemically indistinguishable from fossil fuels.

WUSTL recieves research funding from many sources in addition to the DOE. For example, the National Institute awarded the university 950 grants in 2017, totally over $430,000,000. Laboratory Equipment suppliers wishing to increase their 2018 sales should plan on attending the 20th annual BioResearch Product Faire™ at Washington University in St. Louis on Wednesday, April 19, 2019.

Last year, this event attracted 227 attendees. Of these attendees, 63 were purchasing agents, professors and post docs, and 42 were lab managers. These attendees came from 28 different research buildings and 42 on-campus departments.

For more information about exhibiting at this biotech trade show call (530) 272-6675 or visit the link below: 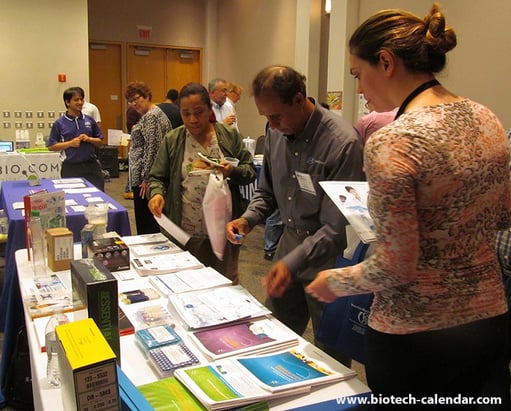 This biotechnology trade show is an excellent opportunity for life science researchers and laboratory equipment suppliers to network and discuss their research needs and solutions. Researchers are invited to attend the on-campus trade fair for free. For more information or to pre-register, click the link below.