Though we often report on the miraculous effects of suppressing or expressing just one gene, very often changing a single gene has minimal impact. However, in some cases the combination of two genetic changes does something far more drastic than changing either gene individually. In a recent study published by The Ohio State University, a research team found two innocuous gene variants whose mutations work together to protect against heart attacks.

The gene in question is called DBH, and its primary function is to control the conversion of dopamine to norepinephrine. Norepinephrine is a chemical that can overstimulate the heart and thus increase the risk of heart attacks. Thus reducing the production of noreprinephine reduces the risk of a heart attack. 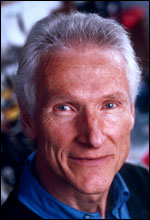 With this goal in mind, Ohio State professor of pharmacology Wolfgang Sadee (left, courtesy OSU) and his graduate student Elizabeth Barrie worked to find mutations of the gene that would decrease noreprinephine production. They tried several gene mutations to DBH, most of which had little or no effect. But together, two of their mutations significantly cut down the presence of the chemical.

“The best thing about this study is we were able to use human tissue samples and do molecular genetic studies to identify which specific variants were important, and then we used other existing databases to validate the results clinically,” says Barrie (right, courtesy OSU) of their work in a recent OSU article.

The next step for the team is to find out what other effects, good and bad, come from reducing norepinephrine. “Norepinephrine has a huge impact on the body on all levels – metabolic effects, a possible association with body mass index, diabetes, you name it,” Sadee says. “That’s why this is important.”