Harvard Researchers Use Zebrafish to Observe Origin of Cancer Cells

Cancer Research UK released a staggering statistic in 2014: 46% of people who have cancer are diagnosed during stages 3 or 4; these late stage diagnoses greatly reduce the chances of survival, as treatment success drops once cancer has progressed to such an advanced stage.

Findings published recently in Science by Harvard researchers may bring new hope to the medical community though. For the first time in history, cancer cell development has been observed in vivo. Researchers at Harvard-affiliated Boston Children's Hospital have witnessed melanoma progress from a single, healthy cell to a full-fledged tumor mass in zebrafish. This observation could lead to genetic tests which allow doctors to catch cancer development earlier on and result in more successful treatments.

Dr. Leonard Zon, Director of the Stem Cell Research Program at Boston Children's Hospital (right), took on the role of lead investigator of this research project. His team decided to focus on a set of specific cancer genes and using zebrafish, watch how merely cancer prone cells evolved into malignant versions.

To observe this development clearly in vivo, Dr. Zon's team gave this group of zebrafish a human cancer mutation found in benign moles (BRAFV600E) and removed the tumor suppressing gene p53. They further genetically engineered the subjects to light up fluorescent green if the specific genes of interest became active, signaling that a genetic program characteristic of stem cells was present.

“Every so often we would see a green spot on a fish," noted Dr. Zon."When we followed them, they became tumors 100 percent of the time." 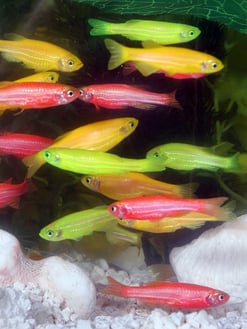 These cancer genes of interest, most notably Crestin, were also found to be active during zebrafish embryonic development, specifically in stem cells responsible for dividing into pigment cells (melanocytes) within the neural crest. The discovery that these genes can turn on in healthy adult cells could be crucial to the understanding of how cancer cells originate: with these cells reverting back to their neural crest forms, they become capable of dividing, unlike their predecessors, and officially become the definition of cancerous.

As Dr. Charles Kaufman, of the Zon Laboratory and first author on this study, summed up,

“We found that the beginning of cancer occurs after activation of an oncogene or loss of a tumor suppressor, and involves a change that takes a single cell back to a stem cell state.”

Drs. Zon and Kaufman hypothesize that these findings could lead to important advances in early cancer detection in suspicious moles. Additionally, they believe their research has implications for more cancers than just melanoma, since their proposal of primed cancer cells defaulting back to their embryonic states is not selective to melanin-forming cells.

Funding for this project was provided by the National Institutes of Health, the Melanoma Research Alliance, and the Howard Hughes Medical Institute, among others.

Biotechnology Calendar, Inc. has been producing life science trade shows at top research institutions for more than 22 years at nationally renowned research institutions and universities. We are pleased to be offering the 10th Annual BioResearch Product Faire™ in Boston on July 14, 2016 at the Longwood Medical Center adjacent to Harvard Medical School. Connect with leading researchers and showcase your laboratory products at this Boston event. To learn more, click the button below.