Despite its effectiveness and potency, chemotherapy is highly disputed because at its base level, it’s exposing the body to high amounts of radiation. In some cases, the amount of radiation needed to kill a cancerous tumor is more than the human body can take. At the University of Michigan, Ann Arbor, researchers are working to change this by making humans more resistant to chemotherapy.

In the eyes of University of Michigan associate professor Jian-Guo Geng (left, courtesy of www.umich.edu), chemotherapy is a powerful answer to cancer whose treatment potential remains untapped. "All tumors from different tissues and organs can be killed by high doses of chemotherapy and radiation,” he asserts; however, there’s an obvious downside to a complete reliance on these methods. “[T]he current challenge for treating the later-staged metastasized cancer is that you actually kill the host before you kill the tumor.”

What Geng and his lab have found is an unlikely way to survive large amounts of radiation: preserving the health and functionality of the gastrointestinal tract. In their study, lethal doses of chemotherapy were administered  to mice whose gastrointestinal tracts were kept completely healthy. 70% of this group survived the radiation, compared to 0% of the control group.

It’s easy to say that for the purposes of this study, the researchers kept some tract healthy, but of course the method by which they protect said tract is the most important and groundbreaking part of the research. The secret is in the molecule R-spondin1, which Geng has worked with independently for over a decade. R-spondin1 interacts with stem cells in the intestine, which normally work to regenerate the intestinal area from damage. Of course, with high doses of chemotherapy they can’t regenerate fast enough to make up for the destruction. Fortunately, R-spondin1 kicks these stem cells into overdrive, allowing them to work at a pace much closer to that of radiation effects. 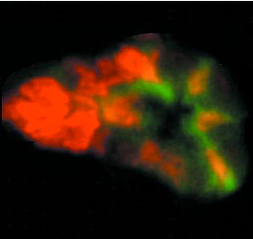 While the research is but a stepping stone in the realm of fighting cancer, it holds a very high level of promise. “The next step is to aim for a 100-percent survival rate in mice who are injected with the molecules and receive lethal doses of chemotherapy and radiation," says Geng in a University of Michigan press release. “In this way, the later-staged, metastasized cancer can be eradicated by increased doses of chemotherapy and radiation." Geng is confident that making chemotherapy safe enough to fully utilize is the key to destroying tumors of any size and stage. In fact, he holds that “people will not die from cancer, if our prediction is true."

Geng’s study was funded by several grants from the National Institutes of Health. For a more in-depth analysis of research funding and grants awarded to the University of Michigan, Ann Arbor, take advantage of our complimentary Funding Stats and Vendor Show Info report:

Biotechnology Calendar, Inc. pays a visit to the University of Michigan each year for its Ann Arbor BioResearch Product Faire™ held annually. Biotechnology Calendar is a full service event company that has produced on-campus, life science research trade shows nationwide for the past 20 years. We plan and promote each event to bring the best products and services to the finest research campuses across the country. If you are a university researcher or a laboratory product vendor, consider attending one of our on-campus trade shows: here is our 2013 schedule.