After a lifetime struggle through congenital heart complications, Lindstrom’s condition became severe this summer when doctors told her she would not only need a new heart, but a new liver and kidney, too. According to Emory University, all other avenues of treatment had been unsuccessful.

Lindstrom was put on the waiting list for a heart and a liver in September of 2011. By May 2012, doctors discovered she had cytomegalovirus, and she was put in the hospital and had to be treated by the emergency measures of dialysis and breathing machines. Soon after, Lindstrom moved up on the waiting list for three new organs, now including a kidney.

Emory doctors told Lindstrom that a match had been found for her on July 7, 2012. That day, she underwent a lengthy heart and liver transplant. 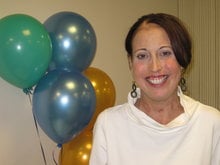 "The risks for a triple organ transplant are very high for a patient with a three-system failure, and one we had never attempted before," Kogon said. "Her previous surgeries and critically-ill state at the time of the transplants made things challenging. But Mrs. Lindstrom's age and determination to survive made her an ideal candidate for these procedures."

Five months later, Lindstrom celebrated her 38th birthday in December. A celebration was held in her honor the day after she turned 38.  Fox 5 reports that all the nurses and Emory doctors who were present during her life-saving surgery attended.

"You are a medical miracle and we are so proud of you and proud to participate in your care,” said Dr. Knechtle. “When I think back six months or so and remember you in the ICU, you were amazingly ill. In fact, you were so ill, we had debates on whether to go ahead. And we bet on you because of your tremendous determination.”

Lindstrom’s doctors were persuaded to go through with the operation in light of her brave spirit. Such a surgery had never been done before in Georgia and has only been successful a few times in the rest of the country.

"We all came together all on board and knew if anyone was going to make it, it would be someone like her," said Dr. Brian Kogon. "Seeing her recover well is just that much more meaningful knowing how special she is."

According to NBC 11, Lindstrom says she's overawed with thankfulness for the new chance at life she’s been given.

"It's hard to express," she said in regards to the gratitude she feels for her Emory doctors. "They worked so hard on getting the organs, from putting them in to helping me recover, I mean everything. They worked around the clock for months."

Her Emory doctors say Lindstrom is incredibly brave, and her determination to live in light of the pioneering surgery has helped doctors prove that new procedures can be performed successfully.

If you are a lab supplier of science researcher interested in networking with others in your field at Emory University, Biotechnology Calendar, Inc. invites you to attend our annual Emory University trade show. Biotechnology Calendar, Inc. is a full-service science research events-planning and marketing company that runs events at top research institutions nationwide. If you are interested in attending a trade show closer to home, we encourage you to check out our 2013 calendar of events.