The two principal investigators in this project to reverse-engineer a dog's nose on a microchip are Dr. Carl Meinhart of mechanical and environmental engineering and Dr. Martin Moskovits of chemistry and biochemistry at UCSB and the ICB. The lead authors are (former) doctoral candidates Brian D. Piorek and Seung Joon Lee. The spin-off company is Santa Barbara-based SpectraFluidics, where Dr. Piorek is now Chief Scientist. The technology is informed by the biological design and microscale size of the canine olfactory mucus layer, which absorbs and concentrates airborne molecules. According to Moskovits in an ICB press release:

"The [microfluidic] device consists of two parts. There's a microchannel, which is like a tiny river that we use to trap the molecules and present them to the other part, a mini spectrometer powered by a laser that detects them. These microchannels are twenty times smaller than the thickness of a human hair."

Piorek expands upon the accomplishment:

“The device is capable of real-time detection and identification of certain types of molecules at concentrations of 1 ppb or below. Its specificity and sensitivity are unparalleled."

Meinhart summarizes, in the video below:

"Dogs are the gold standard for explosives detection as well as detection of vapors from illicit substances. What we were able to do is develop a machine based upon microfluidics and nanotechnology that can sense with the same quality and performance that a dog does, and in some instances even better."

The Institute for Collaborative Biotechnologies is a joint effort by more 60 faculty and 150 researchers at UCSB, MIT and CalTech. (By far the majority of investigators in ICB are at UCSB.) The UCSB ICB labs are located in Elings Hall (below), which is also home to the California NanoSystems Institute (CNSI). Similar in its bio-inspired technology mission to the Wyss Institute, ICB research is carried out in these primary areas: 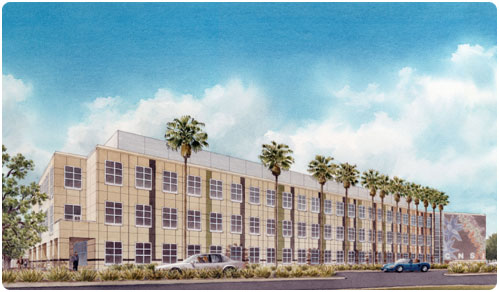 [Elings Hall, home of the ICB and CNSI at UCSB, courtesy of the Institute for Collaborative Biotechnologies]

Biotechnology Calendar, Inc. will be on the UCSB campus on April 2, 2013 to hold our 5th Santa Barbara BioResearch Product Faire FrontLine event, connecting researchers with the resources they need to further their science research goals. Life science researchers, lab managers, and purchasing agents are actively invited to attend.  Potential exhibitors can click the button below for more information on the upcoming show: