What this means in the larger picture is that courts are coming out on the side of open source genetic science  and not on the side of corporate intellectual patents.  The distinction that forms the basis of all of the rulings, for and against the plaintiffs, is whether the would-be-patent adds something significant beyond isolation of a specific genetic sequence.  Though the ACLU has become involved in these cases that verge into thorny ethical territory (patenting human DNA), the big market issue is whether anyone can produce diagnostic tests based on commonly-held scientific knowledge.  Now that sequencing has become affordable and personal medicine is a reality, research hospitals don't want to have to have their patients' diagnostics sent out to a proprietary lab for results.

So what can we expect now?  Will life science research companies pull back on expensive gene sequencing research and testing because they don't see a future where they can recoup their expenses with a patent?  Or will the open market mean greater access to diagnostic tests and the ability to get a second opinion? Is it a blow to intellectual property rights or an open door to further, more collaborative research?  The likely scenario is that companies like Myriad will find ways to diversify their product offerings, and new companies will focus their research and product development on deliverables that explicitly rely upon the kind of significant additive component that will make them patentable under current law. 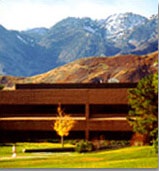 Myriad was founded in Salt Lake City in 1992 by a University of Utah scientist, a Harvard scientist, and several investors.  In 1994 they sequenced, cloned, and patented one of the breast cancer genes, BRCA1.  Since then they have been the sole proprietors of the BRCA1 (and subsequent BRCA2) diagnostic tests, and they retain all of the collective data from those test results.  The company is headquartered at the University of Utah Research Park, and the University is one of the patent holders.  Established in 1968, the Research Park is currently home to 82 university tenants (almost exclusively biomedical) and 53 businesses (again bioscience-oriented).

[Research Park picture courtesy of the Univ of Utah]

As for the University of Utah, uncertainly about the future of gene patenting hasn't slowed down their research into breast cancer genetics. In fact, the University just issued a press release announcing  that researchers have identified another gene, called XRCC2, that seems to put a woman at risk for breast cancer when mutations occur on it. The article reporting the study was just published in the online American Journal of Human Genetics and was authored by these Utah scientists, plus a colleague in Australia:

Watch for another blog from us soon on the OSTP's implementation of its Big Data Initiative for further sharing of genomic resources through the 1000 Genomes Project.

Biotechnology Calendar, Inc. is a full-service event marketing and planning company producing on-campus life science research tradeshows nationwide for 19 years now. We plan and promote each event to bring the best products and services to the best research campuses across the country. Life science researchers, purchasing agents, and lab managers are actively invited to attend to see the latest products and equipment and discuss their laboratory tool and service needs.

On September 20, 2012 we will be holding our 12th annual Utah BioResearch Product Faire Front Line event on the campus of the University of Utah in Salt Lake City. Click the button below for more information and statistics on this show:

Be sure to check out our nationwide show schedule for 2012. If you liked this article, its easy to subscribe, just paste your email address in the the open field in the upper left corner of this page.