University of Alabama to Profit from Research & Development Tax Incentive

One of the ways to encourage companies to invest in research is to offer them a tax credit incentive, and that's exactly what many states do, including, soon, Alabama.  If the company does their own research, they get one tax break, but if they have it done by a public research institution like the University of Alabama, they get a much larger break: 15% under Alabama's proposed new law. That's good news for UAB, UAT, and other major research campuses in the state. And the rate may be even higher if Alabama tries to match North Carolina's incentive, which just went up to 20%.

[The University of Alabama Tuscaloosa campus, courtesy of UA]

The bill is SB386, and it's part of a package designed to create jobs in Alabama, in this case by offering a tax cut that most other states already offer.  The idea is both to encourage existing businesses to conduct more R&D, thereby creating jobs, and to attract new business to the state.  For UAB the increased research funding not only would go to support current projects and laboratories, but it would help them recruit more top research faculty and grad students, which in turn would boost their ability to bring in further NIH and NSF grant monies. Growth, in other words.

Meanwhile, in anticipation of further growth, UA Tuscaloosa's new Science and Engineering Quad is now in Phase IV of a massive construction project, having just opened the doors on its South Engineering Research Center at the end of January. It sits across the Quad from Shelby Hall (completed in 2004, with 70 research labs) and the Science and Engineering Complex (already home to chemical and biological engineering research), which is scheduled for final completion in the summer of 2013. At that time it will include more than 100,000sf of research laboratories, faculty offices, graduate student areas, conference and meeting facilities, and other collaborative spaces. UA's commitment to state-of-the-art science research, combined with the strength of its medical school on the Birmingham campus, puts it squarely in the ranks of the very best public school systems in the South. 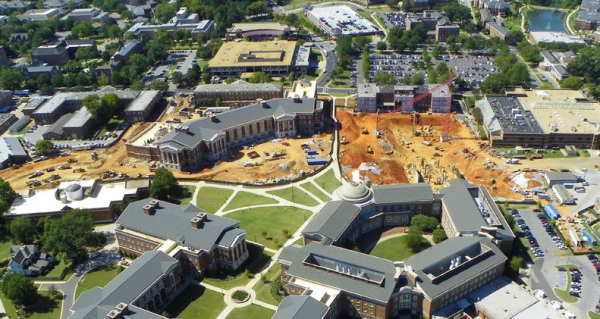 Biotechnology Calendar, Inc. will be at the University of Alabama November 1, 2012 to hold its 13th annual Birmingham BioResearch Product Faire event. This well-attended trade expo brings together research investigators, lab managers, and purchasing agents with top life science equipment providers to network and discuss lab research needs and new technologies. For information on exhibiting, click the button below.

Be sure to check out our complete 2012 Show Schedule too.