No more coolers for hearts on their way from donor to recipient.  UCLA Medical has recently successfully transplanted a warm, beating heart into 61-year-old man with cardiomyopathy.  The surgery was part of a clinical trial program that UCLA and other research hospitals in the United States are enrolled in to study the benefits of a new transport system for warm organs from Massachusetts company TransMedics.  The warm box technology is known as their Organ Care System (OCS), and it keeps the heart beating and operational throughout transport, rather than freezing it.  Specifically, the TransMedics system has these key functions, according to company specs:

The patient who received the donated organ last month was an Arizona man, Rob Evans, who had been hospitalized at UCLA for 6 weeks waiting for a heart.  He had been on a waiting list for 3 1/2 years, and his condition had become critical when he entered the UCLA hospital.  9 days after the surgery he was walking up hills and said his new heart was "beating like crazy."

Evans' warm heart surgery was the 11th one that UCLA has now performed, and it is still enrolling patients in the clinical research program to see if these hearts, not put on ice, are as functional as the frozen ones.  TransMedic's OCS underwent trials in Europe in 2006 and the technology has been available there since 2009.  Results from that study show a dramatically quicker post-surgery recovery, allowing patients to return to their lives sooner than with a traditional transplant.

In addition to improved recovery time, the medical benefits of using a heart that has been kept beating could include: 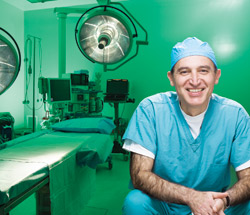 This last point is especially interesting to consider.  According to Dr. Abbas Ardehali, surgical director of the heart and lung transplant program at Ronald Reagan Memorial Hospital at UCLA and the PI for the research trial, the OCS transport device not only allows the heart to avoid the damages it can incur from freezing, but it can potentially be optimized:

“It might sound like science fiction, but the reality is that maybe in a few years we can take organs from donors and then improve them and make them better organs and then transplant them."

"The human heart was never meant to be on ice."

If medical researchers had time to work on hearts after their removal from the deceased donor, they could increase the number of organs available for transplant (which is always smaller than the need).  In addition to healthy and fully-functional hearts, they could make use of damaged hearts caused by time spent in a brain-damaged donor body.  Perhaps stem cell technology would allow them to regrow damaged blood vessels or weakened areas so that the transplanted organ would be at its most robust when it was put to work in the recipient body to pump blood for a new and longer life for someone like Mr. Evans.

(Photo of Dr. Ardehali in scrubs, above, courtesy of UCLA Magazine)

Biotechnology Calendar, Inc. is a full-service event marketing and planning company producing on-campus, life science research tradeshows nationwide for the past 18 years. We plan and promote each event to bring the best products and services to the best research campuses across the country. Visit our website for information about upcoming life science shows in your area.

One of our biggest events, held bi-annually on the UCLA campus, is the Los Angeles Biotechnology Vendor Showcase™ Exposition. Plan to attend this year on October 6.