The research involved in measuring infant cognitive ability over the past two decades has clearly demonstrated that babies only a few months old have a solid, basic grasp on the physicalities of the world. Now, MIT's Josh Tenenbaum has co-led a team of international researchers to explore how infants can use that knowledge to form incredibly surprising expectations of how certain new and unfamiliar situations will turn out. 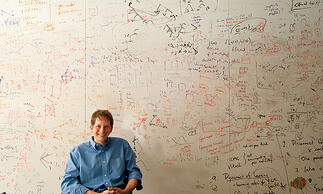 To do this, the team used a computational model of this infant cognition that predicts (quite accurately) the babies' surprise factor in response to certain events that intrude upon their physical conception of their surroundings. This model uses reasoning to calculate the probability of particular events using solely information given to it about how certain objects behave, etc. The accuracy demonstrated "suggests that infants reason in similar ways" says Tenenbaum, Associate Professor of Cognitive Science and Computation at the Massachusetts Institute of Technology.

The study, which appeared in the May 27th issue of Science, is the first step in an effort to map out what infants know and learn about the physical and social world in the first year of life. As part of the Intelligence Initiative at MIT, launched this year, the study examines the cognizance of 3-, 6-, and 12-month-old children. To metaphorically "kill two birds with one stone", this study also acts as an incredible assistant to understanding intelligence's nature and replicating it in machines.

The specific study involves measuring the surprise factors of these babies. Elizabeth Spelke, a professor of psychology at Harvard University, did much of the pioneering work involved with an infant's understanding of abstractions and physicalities. Spelke's work displayed how the infant's level of surprise is measured by the length of time they look at something. The measuring device, Tenenbaum's computational model, predicts how long infants would examine or look at such animated scenarios.

As part of this experiment, 12-month-olds were displayed three blue objects and one red of similar size and shape, all bouncing in a container. After some time, the scene would be concealed from the child, during which one of the objects would exit through the container of the opening.

The results of this study were just as the model predicted. If the scene was obscured very briefly, such as four hundredths of a second, then the infants surprise would be increased if one of the objects farthest from the exit had left the container. If covered for a longer period of time, such as two seconds, then the baby's surprise would be present only if the differing object exited first.

This marks the first time that baby cognition has been modeled with such quantitative precision as with Tenenbaum's model. "We don't yet have a unified theory of how cognition works, but we're starting to make progress on [mathematically] describing core aspects of cognition that previously were only described intuitively," Tenenbaum says. Spelke comments how the new study offers an explanation for how human intellectual development can be both extremely fast and flexible.

Measuring infantile surprise is only a part of Tenenbaum's plan for measuring the immense mental capabilities that it is suspected that developing babies possess. Future experiments include testing physical concepts such as gravity and friction. Tenenbaum is also developing models to measure infants' intuitive psychologies regarding social situations.

If you are a biomedical researcher, a scientist in any of the life science fields, or a supplier of laboratory equipment who would like the opportunity to meet and network with biotechnology research professionals in the Northeast plan on attending Biotechnology Calendar, Inc.'s next BioResearch Product Faire™ Front Line Event in Ithaca, New York at Cornell University. This event is presented by Biotechnology Calendar, Inc. as part of a nationwide series of science tradeshows bringing lab products to researchers and solutions to the community.