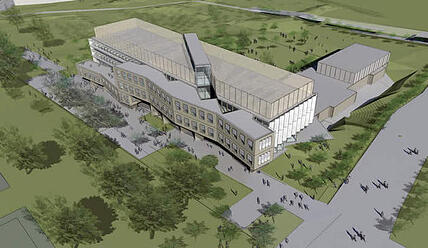 New Sorenson Molecular Biotechnology Building at the University of Utah, Salt Lake City: due to open in 2012.

In 2006, Utah passed a state bill that created USTAR, the Utah Science Technology and Research Initiative, to invest in Utah university research technologies with the aim of commercializing them for the benefit of the state's overall economy.  One concrete form this state support took was a $161 Million building fund, which, with a $40 Million contribution from the universities themselves, led to the construction of two large research facilities, one at Utah State University (Logan) and the other at the University of Utah (Salt Lake City): the Sorenson Molecular Biotechnology Building.  The university donated the land (a caveat of the state funding), which lies strategically between the main campus and the health sciences campus.  The Sorenson Legacy Foundation donated $15 Million to the project, lending the building the name of its famous (and generous) medical device inventor and entrepreneur founder, James Sorenson.

The architects describe the facility and its impressive lab resources:

The James L. Sorenson Molecular Biotechnology Building is formed by two connected structures that will integrate engineering and life science research. The facility is de­signed to support 25 to 30 principal investigators in flexible, bioscience research laboratories, and includes the following specialty core facilities:

The building is designed to stringent shielding, vibration, and exhaust parameters generated by so­phisticated research instruments and their utility requirements.

The Nanofab unit in the UT College of Engineering boasts:

The Sorenson Building is the first of a planned 4-building complex on the site between the upper and lower campuses (formerly the university golf course). Drawing on the university's existing strengths and their commercial potential, the Sorenson building will include the following components:

[Video tour courtesy of USTAR and the University of Utah]

If you are a research scientist in any of the life science fields, or a supplier of life science laboratory equipment who would like the opportunity to meet and network biotechnology research professionals in the Salt Lake City area, you can plan on attending the Salt Lake City BioResearch Product Faire™ Front Line Event on the University of Utah campus on September 15, 2011.  This event is free to science professionals and is presented by Biotechnology Calendar, Inc. as part of a nationwide series of science tradeshows bringing products and solutions to research scientists.