Feeding the world's populace now and in the future is a major concern of the US Food & Drug Administration.  One way to increase the food supply is to eradicate diseases that ruin crops, and one of the most notorious of those diseases is late blight (of Irish Potato Famine infamy).  UC Riverside's Howard Judelson has been studying the fungus-like microbe that attacks potatoes and tomatoes for the past 20 years, 17 of those at UCR in the school's Center for Plant Cell Biology (CePCeB) as a plant pathologist.  Though competition was fierce for the FDA funding, Judelson was chosen to lead a nationwide team of researchers in a $9Million project to find a way to control the disease.  Of the $9M awarded, $4.3M is budgeted wholly to UCR.  Also on the team from CePCeB to sequence Phytophthora infestans is plant bioinformatics researcher Thomas Girke. 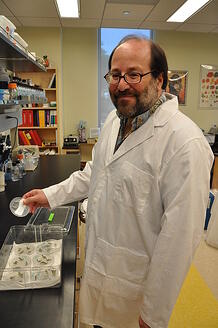 To announce the award and discuss details with UCR researchers, Dr. Cathi Woteki visited campus this week.  She is the USDA's Chief Scientist and Under Secretary for Research, Education and Economics.  During her visit she gave a lecture on global agricultural issues called "Why Science Matters to Agriculture."  While late blight is not a serious problem in California, where summers tend to be hot and dry, it is virulent in damp climates and can destroy an entire crop within a week, even if that crop has already been harvested.  The decision to make Riverside the lead institution on this project was based on UCR and CePCeB's strength in agricultural research, especially with regard to this particular pathogen.

The $9M project will have four components, according to the USDA:

The FDA grant was awarded through the National Institute of Food and Agriculture (NIFA) and its Agriculture and Food Research Initiative (AFRI), established under the 2008 Farm Bill.  The $9M USDA grant is the third-largest Riverside has won in the past ten years and one of the largest handed out by the USDA this year, according to Inland California's Press-Enterprise newspaper.

If you are a supplier of life science laboratory equipment and would like to meet researchers and industry representatives in the Riverside area, plan on attending Biotechnology Calendar's 6th Annual Riverside BioResearch Product Faire™ Event August 24, 2011.  This UCR trade show is sponsored by CePCeB, the Center for Plant and Cell Biology.