Gene manipulation is a very fine-tuned science that is prevalent in all sorts of biotechnological lab work. We often think of genes as controlling a very precise function or set of functions; for instance, the particular gene responsible for damaging tissue in gum disease, which we looked at in a previous Ohio State blog, or the gene responsible for pollination features in bees, which we saw in an earlier Michigan State blog. Now a research project from University of Illinois, Chicago introduces a way to delve deeper than even the gene level and look at the roles of individual molecules that the genes influence. 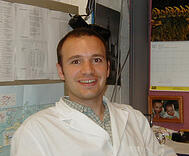 This sort of a technique may seem more fine-tuned than necessary, but in fact it is often exactly the reverse: the gene-level approach is too broad to properly address the root of the problem and nothing else. Take the enzyme Scr as an example. Scr catalyzes many reactions, including those related to cell movement, but it also plays a role in the uncontrollable growth of cancer cells. Andrei Karginov (pictured left), UIC professor of pharmacology, compares it to “the conductor of an orchestra, directing multiple musicians that together create a complex piece of music” in a UIC article. “But it’s hard to accurately detect the contribution of a single violin in the orchestra,” he says in regards to pinpointing Src’s cancer-promoting functions.  Here deleting the gene that regulates the expression of the enzyme would be overkill; Src does have other redeeming features like its ability to promote cell movement.

To obtain more specificity, Karginov and the team developed a method to pinpoint the exact molecules influenced by a particular protein or enzyme. According to Karginov, “Now we can preserve and control the function of the protein conductor, so to speak, and tease out the relationship between that protein and one of the many molecules it interacts with and observe how that specific cellular pathway influences cellular behavior.” They used their method on Src to find very precisely how the enzyme “promoted cell movement”: there is actually one molecular pathway that lets the cell grow tiny arms, and another that gives these arms the adhesion they need to pull the cell along (Pictured below, courtesy UIC). 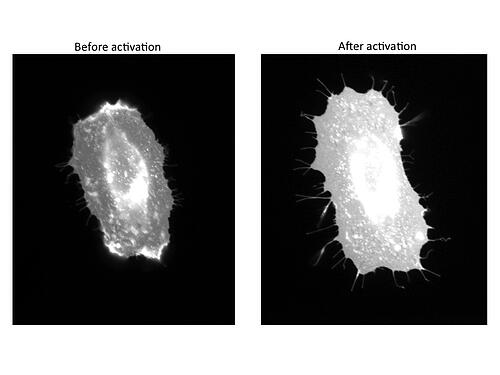 Next on Karginov’s plate is finding the exact pathways responsible for the cancerous growth properties of Src and developing drugs to interfere only with those pathways and not the gene as a whole. His research was funded by three grants from the NIH. To obtain more detailed information regarding funding, research, and development at UIC, read Biotechnology Calendar’s complimentary University of Illinois, Chicago Funding and Vendor Statistics report.

Biotechnology Calendar, Inc.  makes an appearance at the University of Illinois Chicago campus each year for its Chicago BioResearch Product Faire™, held next on May 01, 2014. If you're in the area, we will also be hosting the Urbana-Champaign Bioresearch Product Faire™  on the UIUC campus the day before, April 30, 2014. Biotechnology Calendar, Inc. is a full service event company that has produced on-campus, life science research trade shows nationwide for the past 20 years. If you are a university researcher or a laboratory product vendor, consider attending one of our on-campus trade shows: here is our 2014 schedule of events.