Hard at work at the University of Southern California is Professor Charles McKenna, vice dean of natural sciences and professor of chemistry, pharmacology, and pharmaceutical sciences at USC Dornsife. Professor McKenna’s background in the interdisciplinary application of chemical methods to biological interests has brought forth very innovative approaches to research in many life science fields in the past. Recently, Professor McKenna has received a $6 Million grant from the National Institute of Health to pursue research focused on an enzyme that may become a future target in the fight against cancer.

This enzyme, a DNA repairing enzyme referred to as DNA polymerase beta, has been a main focus for Professor McKenna and his associate Myron Goodman (professor of chemistry and biological sciences also at USC) for nearly a decade. This enzyme, when associated with cancerous cells, can be used to repair damage to the fastly replicating cells caused by treatments like chemotherapy, therefore negating many effects to combat cancer growth. This phenomenon comes into play commonly in patients who have undergone chemotherapy and seem to have gone into remission. As Prof. McKenna explains:

“A typical pattern is that people take the drug, they go into remission for a while and then, after a certain time, the cancer comes back. And now it’s a cancer on steroids. It ignores the drug and creates a worse threat for the patient’s health.”

This revenge the cancer cells takes against the body after a drug, or radiation treatment, has been received is due to this enzyme being used. Many cancer treatments target the DNA of cancer cells in the hopes of destroying them and keeping them from replicating further; however, if the cancer cells are able to repair their DNA through this enzyme, many of our current drugs have no further effect. 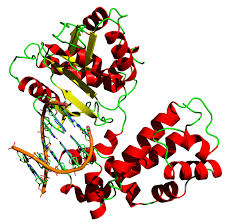 (A 3-dimensional depiction of DNA polymerase)

The goal these researchers have by studying DNA polymerase beta further is to learn how to block it in cancer cells and therefore put a stop to the bypassing of many drug treatments. Additionally, mutations in this enzyme have also been linked to certain cancers themselves. The implications for understanding how this enzyme functions and the mechanisms it employs could not only provide answers to keeping cancerous cells from regenerating, but also to potentially keeping certain cancer cells from ever forming by selectively inhibiting this enzyme.

With this NIH grant, Professors McKenna and Goodman will have funding for this project for the next five years, and therefore they are actively employing a variety of approaches in order to gain new and innovative insights into the enzymes, like DNA polymerase beta, that work closely with the synthesis of DNA. This very complicated and precise process requires these enzymes to make all the right decisions throughout the process, even a small mistake could lead to cancer. Although it is still unknown if these types of enzymes cause these cancers, they are the main focus in the eyes of the researchers due to their close proximity to many cancer cells.