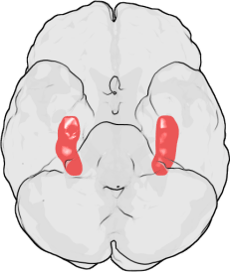 (Image of location of hippocampus courtesy of Wikimedia Commons)

Rutgers University, researchers discovered a molecular pathway in the brain that may help provide answers to long-term memory problems in the elderly and aid in identifying drug-based therapies to prevent dementia. By pinpointing a protein in the brain pathway that enhances memory, Professor Gleb Shumatsky, the co-author of the study hopes that, “This work may provide scientists with answers and therapeutic help in the future for those going through normal aging or suffering from dementia.”

According to an article for Rutgers Today, the study focused on examining how information is transmitted from synapses to the nuclei in the hippocampal neuronal cells. Using laboratory mice, they discovered that the protein CRTC1 enhances memory by controlling gene expression.  Gene expression is the process by which cells control when proteins are made and at what levels they will be released.

The study found that the longer CRTC1 stays in the mouse brain, the stronger the memory. Mice that received longer periods of training had a higher activity level of the CTRC1 protein. They performed better on behavioral paradigms such as fear conditioning and object location, which demonstrated enhanced long-term memory. The researchers also found that the CRTC1 protein activates the FGF1 gene. This gene controls critical brain cell functions, growth and survival. FGF1 is important for tissue maintenance, repair and regeneration. Now scientists linked its activation to the intensity of learning and memory strength.

For those with neurodegenerative diseases which causes dementia, such as Alzheimer’s, decline in memory becomes severe enough to be extremely debilitating. Thus far, no specific biological deficits have been identified as targets for potential treatments. Dr. Shumyatshy and other researchers at Rutgers believe that understanding the molecular pathways in the brain could be the key to finding better treatment options for people suffering from dementia.

“The memory process is very much the same in both human and mouse brains,” said Shumyatsky. “Our group has been unraveling molecular mechanisms that maintain and improve memory, and what our research tells us is that there are different answers to controlling and improving memory.”

The 3rd Annual BioResearch Product Faire™ in New Brunswick, NJ will be held on May 9, 2017. This biotechnology trade show hosted by Biotechnology Calendar, Inc. is a great opportunity for laboratory equipment suppliers to meet face to face with the scientists at Rutgers to discuss their needs and demonstrate the latest research technology. This event is expected to attract over a hundred life scientists from 19 different research buildings and 21 on-campus departments. 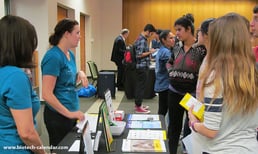 Researchers  interested in discovering new tools and technologies are invited to attend this event for free.  Visit the link below for more information and to preregister: