Washington University School of Medicine in St. Louis is leading an international team studying potential treatments to prevent Alzheimer’s disease. The team recently added a third medicationin this worldwide clinical trial that is already underway. According to the WU School of Medicine news site, the latest investigational drug “is designed to lower production of amyloid beta, a protein that clumps together into plaques damaging neurons in the brain, leading to memory loss, cognitive problems and confusion.”

How is this newest treatment different?

This third drug is designed to actually slow the production of amyloid beta. It is hoped that by blocking the enzyme beta secretase, which produces amyloid beta, there will not be as much amyloid beta available to clump and cause damage to the brain.

More about this Drug Trial:

This study titled “Dominantly Inherited Alzheimer’s Network Drug Trial” (DIAN-TU) began studying participants' responses to the first two drugs in 2015. It will continue following them through 2019.  Additional participants with no symptoms or mild symptoms of cognitive impairment will be enrolled to evaluate the third drug. The study specifically targets those who have mutations in the APP, PSEN-1, or PSEN-2 gene. These gene mutations are linked to early-onset Alzheimer’s’. This form of the disease manifests in people as young as in their 30’s and 40’s.

Three quarters of new enrollees will be be given the beta secretase inhibitor; the other third will receive a placebo. Both groups will be evaluated for the next four years in order to determine if the investigational drug delays or even preventing the onset of Alzheimer’s. Although this trial focuses on people with rare gene mutations linked to early onset Alzheimer’s, treatments that succeed in this population could possibly slow or stop other, more common, forms of Alzheimer’s. It is believed the destructive processes in the brain are much the same for both types of the disease.

Maria Carrillo, PhD, chief science officer of the Alzheimer’s Association, which is helping to fund the trial, states, “We are pleased to see the DIAN-TU trial researchers continuing to broaden the types of investigational drugs they are testing.”

In addition to the new drug, the trial will now include an investigational imaging-based marker targeting disease progression. This novel radiopharmaceutical tracer is designed to detect the brain protein tau by (PET) scan. Investigators are hoping this new imaging method will uncover the presence of tau tangles before an individual starts showing symptoms and that it will help predict the onset of dementia more accurately than existing biomarkers. 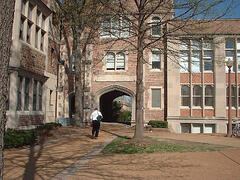 The 18th annual BioResearch Product Faire™ at Washington University in St. Louis is will be held on March 31st, 2017. It is an excellent opportunity for life science researchers and laboratory equipment suppliers to network and discuss their research needs and solutions. Researchers are invited to attend the on-campus trade fair for free. For more information or to pre-register, click the link below:

There are over 2,000 faculty physicians at WU's School of Medicine. It is one of the leading research, teaching, patient care institutions in the country. Laboratory equipment suppliers interested in marketing their products at this prestigious university can visit the link below or call (530) 272-6675 for more information about exhibiting.